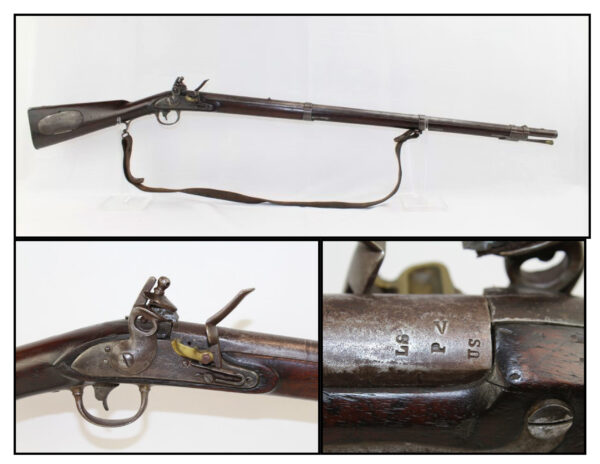 Here we present an antique flintlock U.S. Model 1817 “Common Rifle” from the R. Johnson Contract, made circa 1821 in Middletown, Connecticut. This rifle was made by several contractors from about 1817 to about 1840 with a total of 38,200 being made. This particular contractor only made about 5,000 of that number. Though many of these were converted to percussion, this rifle is in its original flintlock state. The U.S. Model 1816 became the standard American infantry rifle, but the Model 1817 was made during the same period and is arguably the better of the two. The 1820s was a time of expansion in many ways for the still-young United States, conflicts with Native Americans and other foreign powers could not stop the growth in terms of the population or territory. The Florida Territory was acquired from Spain, the fur trade was going full tilt out West, and the Santa Fe Trail was getting rather busy. Many of these rifles were used during the American Civil War, especially in the early days of the conflict when military weapons were hard to come by and these were still a solid choice.

One of its most distinct features is the large iron patchbox in the stock. The lock is marked “U.S./R.Johnson” and “MIDDtn CONN.” around a now faint federal eagle. The tail of the lock is dated “1821”. The left stock flat bears a visible inspector cartouche “LS” for Luther Sage. His initials also appear at the breech of the barrel along with US ordnance view and proof marks. It comes with an ancient leather sling with a shield shaped marking on the tail.

The overall condition is very good. The steel surfaces have a dark plum patina. The markings are legible. The stock is in good shape with various little handling marks of the normal variety. The bore is smooth and dark. The action is excellent.