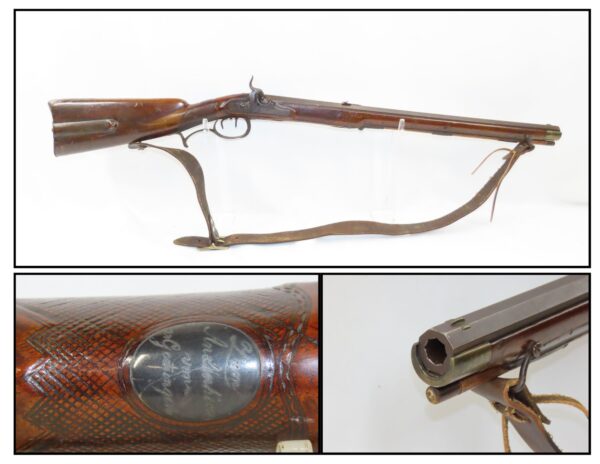 Here we present an antique Germanic Jaeger Rifle by Hueber, made circa the early-19th century in Meiningen. This one is inscribed on the silver thumb plate with “Zum Andenken von Ge­ ingen”: In Memory of von Gemmingen” (the line over the “m” is old German for a double “m”. The von Gemmingen family is an ancient noble family that can trace their roots back to around the beginning of the 7th Century. Many notable figures have come out of the family, which remains today in two main tribes. The particular family member mentioned in the inscription is not known for sure. However, a strong contender is Karl Weiprecht Reinhard von Gemmingen (September 16, 1797-February 11, 1882), who became a forester in Meiningen before rising to the rank of Saxon-Meiningischen Land-Oberjägermeister in the service of his personal friend from school, the Duke Bernhard II.

What is now recognized as the Jaeger type of rifle, goes back to at least the early 17th century. It is characterized by its short overall length, robust octagonal barrel and usually a substantial butt stock with a raised cheek piece, set triggers, and a sliding wooden patch box. This made it very handy to carry and load for the forester or hunter where it originated in the Hesse and Bavaria regions of Germany. In fact, the jaeger was very influential in the design of what is now considered the American (Kentucky/Pennsylvania) Long Rifle. This was due to the jaeger’s use by some of the Hessian mercenaries during the American Revolutionary War, as well as the number of German immigrants that congregated in Pennsylvania in the 18th century. In addition, several countries liked the concept of the short jaeger rifle so much that they designed their military long arms after it.

This example was made in the early-19th century in Germany. It utilizes a percussion firing mechanism, having been converted from flintlock. It has a short, 23-1/2 inch octagonal barrel with a large bore of .52 caliber. The wood stock is nicely checkered and features a sliding patch box. The maker put his mark in silver inlay, both on the lock (“F. Hueber”) and on top of the barrel (“Fr. Hueber in Meiningen”). These inscriptions are fully intact but difficult to capture with a camera.

The overall condition is very good. Strong action. Great bore. The stock is solid throughout with a 2-inch split on the left side near the muzzle. Inscribed barrel, lock, and wrist escutcheon in script. The leather sling is in good shape. Here is a wonderful example of German history for the collection!