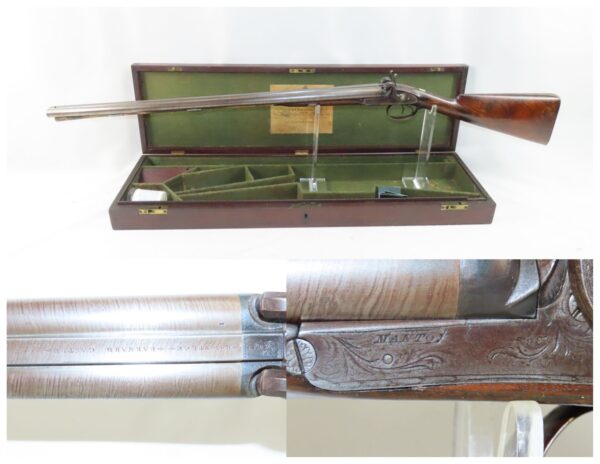 Early to Mid-19th Century European 14 Gauge Side by Side

Here we present an antique Cased and Engraved Manton Percussion Double Barrel Side by Side Shot made circa the 1830s in London, England. There were originally two Manton brothers, John was the elder and Joseph was the younger. John was born in 1752, and after his apprenticeship, set up shop in London in Piccadilly. John Manton was active in London from 1781 to 1834. He began making percussion weapons in 1825. The firm used the name “John Manton and Son” from 1820, though his son George Henry Manton had joined him in 1814. After John’s death the family continued to operate the business into the early 20th century with some slight changes in the name. Among the apprentices he trained in gunmaking are famous names such as William Greener and John Blanch, along with his famous brother, Joseph Manton.

The example is marked “ROWNTREE—BARNARD CASTLE” on the rib. The barrels are simply marked “STUBBS” and have Birmingham proofs underneat. William Rowntree was a known gun retailer working out of Barnard Castle, England. The case has a crest with “DUM VIVIMUS VIVAMUS”, which is a Latin phrase that means “While we live, let us live.” It is often taken to be an Epicurean declaration.

The overall condition is very good. Very nice Damascene pattern. The actions are excellent. The bores are smooth and in good condition. The stock is solid. The case is in nice shape.