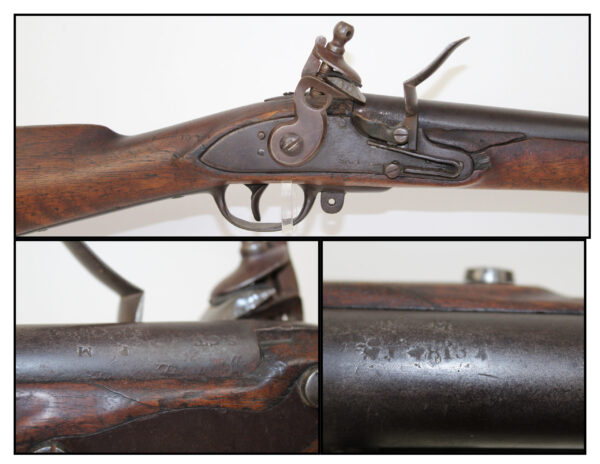 Here we present an antique L. Pomeroy Model 1808 Flintlock Musket, made in 1813 in Pittsfield, Massachusetts. Europe was embroiled in the Napoleonic Wars and the young United States was sorely unprepared for any major military action, so Congress moved to equip state militias in 1808. About 85,200 “Model 1808” Muskets were produced by a total of 19 different contractors and delivered to the state militias. This move proved to be none too soon as the War of 1812 brought part of the European conflict to the shores of the US. Lemuel Pomeroy was a perennial contractor of U.S. martial weapons in the first half of the 19th Century. Many of these flintlock muskets were later updated to percussion systems for use during the American Civil War.

Both the lock and the barrel are marked “S.CT”, possibly standing for State Contract. The barrel is inspector marked “P    M” and “SJ” with a date of “1813”. The musket is mounted in iron hardware.

The overall condition is good. The metal surfaces bear an even, dark patina. The markings are clear and legible. The stock is in mostly good condition with two slivers on the right side of the gun, one just forward of the lock and the other just forward of the rear barrel band. The smooth bore is fairly caked with dust and appears untouched since the 19th Century. The action is strong.