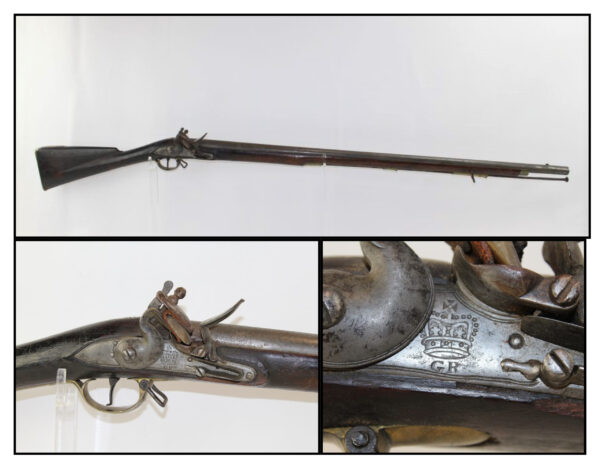 Here we present an antique Brown Bess Flintlock Musket, made in England circa 1795. This pattern of Brown Bess is the same that fought Napoleon Bonaparte in numerous iconic battles, as well as the United States and their American Indian Allies during the War of 1812. This pattern may also correctly be called the “India Pattern” since the Honorable East India Company was the entity responsible for this update to the gun that had been around since 1722. When war with France loomed on the horizon, the British Board of Ordnance diverted these muskets from the EIC contract to supply the war effort. The success of this model can be gauged by the fact that between 1795 and 1815, nearly 3,000,000 gun were produced. Although the Birmingham gun trade was responsible for the majority of the production, the London gun trade played a part, through gun makers such as Ezekial Baker, William Parker, Thomas Reynolds, and Durs Egg. According to the London proof-house records, they and others in London were responsible for producing 845,477 muskets.

The lock is marked with the royal cypher, a crown over “G.R.”, standing for Georgius Rex or King George. Birmingham proof marks are located on the left side of the barrel.

The overall condition is very good. The iron parts have an even gray patina. The markings are clear. The stock has obvious signs of use and remains solid. The bore is smooth and dusty. The action is excellent. If you have an interest in history, there is not a more tangible relic of the massive influence of the British Empire than this musket, and it is yours to own!