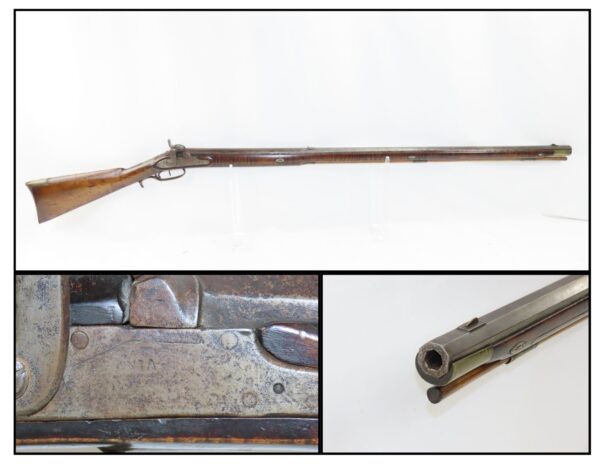 Here we present an antique Long Rifle with a Virginia Manufactory Lock, made circa the first half of the 19th Century. This rifle bears similarity to the 2nd Model long rifles that were produced by the manufactory and by contractors circa 1812-21. The initial order to develop a rifle came in 1803 (1st Model). These were to supplement the smoothbore musket production and to provide militia units with a specialized, precision weapon that could be used for sharpshooting as well as sustaining the unit in the field by means of hunting a foraging.

There is some variation within those positively identified and much that remains unknown about these rifles. The second model was .50 caliber with an octagonal barrel held to the stock by keys (wedges). A big identifier of these rifles is their patch box. The 1st Model had a very distinctive coiled up rattlesnake on the exterior. The 2nd Model’s patch box was unengraved. There is no mention of those lacking a patch box in Giles Cromwell’s book on the topic. However, while 2,093 rifles were made by the Virginia Manufactory from 1803-1812, 2,145 were made by various private gunsmiths on contract with the government, and again, there was a lot of variation.

These rifles were being used during the War of 1812 (1812-1815) just as soon as they could be made. One fascinating passage from Cromwell’s book The Virginia Manufactory of Arms that may also explain variations: “Even with contract rifles supplementing rifle production at the armory, Virginia’s supply of rifles was completely exhausted by the demands created by the War of 1812…The need of additional rifles was so acute by 1814 that the Council advised agents be appointed to collect all suitable public and private rifles in the upper counties…In another measure to obtain rifles, the Executive agreed to increase from fifteen to twenty dollars the amount allowed an officer for purchasing rifles for his company from private gunsmiths.”

Locks were something that the VM had in quantity and many earlier dated locks are seen on later production rifles and muskets, both Manufactory made and by contract. The stock was originally made (inletted) around this lock. After the War of 1812, the state’s flintlock arms remained un-converted until after the Civil War began. The Manufactory had closed in 1821 but reopened briefly to help convert weapons as they cycled in from the front to be updated, in addition to other various gunsmiths. Again from Cromwell quoting Colonel Dimmock of the Virginia Ordnance Department in October 1861: “Almost as if by magic extensive establishment has sprung into existence in Richmond where large number of workmen are employed in repairing and refitting muskets for army use…Every Citizen who possesses an old gun, for which he has no especial use, urged to send it in to Ordnance Dept.”

This rifle features a 42-inch octagonal barrel in .50 caliber. The barrel is secured to the maple stock by 3 keys or wedges. The side plate, butt plate, and trigger guard are of brass. The trigger guard has flat finials. The underside of the barrel is only marked with a small “55” as well as a “V” Roman numeral assembly mark that was punched in. The lock has undergone conversion to percussion, and it looks like a professional armory conversion. The extra holes have been filled and the lock face files down to make those flush, as a result obfuscating the original markings. A large iron bolster was also set into the barrel and brazed, and a substantial hammer replaced the cock. This one has double set triggers. Brass blade front sight and iron rear sight.

The overall condition is very good. The action remains strong. The bore well-rifled and in good shape. Very handsome maple stock with nicely striped grain. There are small splits throughout the butt stock that are stable and weather related. There is also a small, repaired chip at the toe. The lock is marked “RICHMOND/[18]09” at the tail and it is mostly obfuscated along with the other lock markings in the center which were “VIRGINIA/MANUFACTORY”. A “W” or “M” is scratched on the trigger guard. This is a gorgeous example of a long rifle that may have been part of the war effort of 1812 against the British and their allied natives. Whatever its ultimate origin, this rifle was updated to percussion and may have also seen use in the American Civil War. If only this piece could speak!