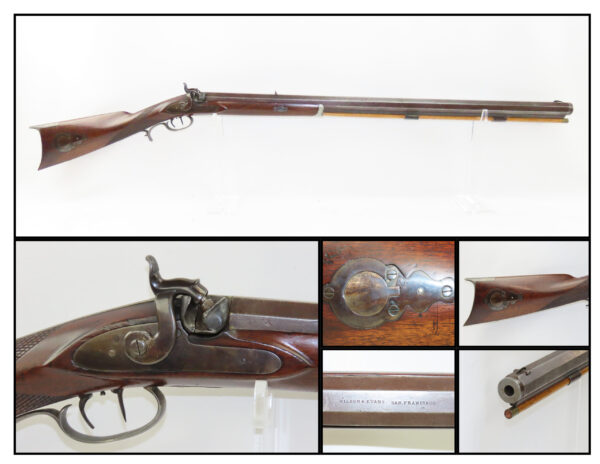 Here we present an antique American Long Rifle by Wilson & Evans in San Francisco, California, made circa 1865.

Hugh Harvey Wilson (b.1828 in England, immigrated, worked for Colt in Hartford, CT before venturing West) and John R. Evans were business partners as early as 1854, just after the Gold Rush of 1849 began. Their first gun shop, Wilson & Evans, was in Sacramento, California. Their addresses were 1854-1858 36 K Street and 1858-1865 122 J Street. They made rifles, pistols, and shotguns, apparently having their own version of the Deringer pistol which was in great demand in the Antebellum period. They expanded their business to San Francisco in 1862 and were so successful that they closed the Sacramento shop to devote their full efforts to their SF shop at 513 Clay Street. Evans is recorded as having been a witness in the (Henry) Deringer v. (AJ) Plate suit regarding Plates blatant Deringer pistol copies and the use of Deringer’s name on them. Eventually, Wilson would buy out his partner and the shop would be called H.H. Wilson (c1874) and then the name would change again (H.H. Wilson & Son) with the incorporation of his son into the business (1878-1884). The son, Henry S. Wilson, would go on to work for the large San Francisco gun dealer/shop Liddle & Kaeding (The Deringer in America, Vol. 1 by Wilson & Eberhart; Heer Der Neue Stockel).

This rifle features a better than medium-heavy octagonal barrel with a turned down portion at the muzzle—this to utilize a plunger-style bullet starter that fit over the end of the barrel. This rifle is equipped with double set triggers for precision shooting. The stock is half-length and has nice hand-cut checkering at the wrist and a small patchbox mounted in the right side of the butt stock. “WILSON & EVANS SAN FRANCISCO” is marked on the top barrel flat.

The overall condition is very good. The action is excellent. The set triggers are crisp. The bore is in nice shape with good rifling. Nice checkering at the grip. This is a rare opportunity to own an American Long Rifle made in San Francisco, California!