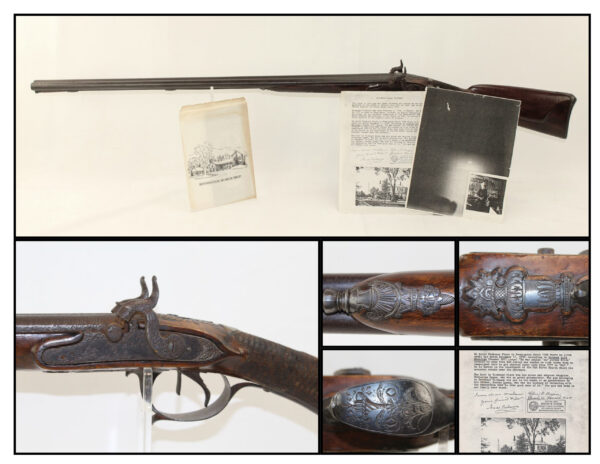 Here we present a Documented Antique Engraved Double Barrel Shotgun, made circa the 1790s. This shotgun belonged to Revolutionary War Assistant Commissary General and Federalist politician Isaac Tichenor. He was a descendant of Martin Tichenor (1625-1681), who was a Puritan and an early colonist and original settler of Newark, emigrating from Sussex County, England. Isaac Tichenor was born in Newark in the Province of New Jersey in 1754 and earned his degree at the College of New Jersey (now Princeton) in 1775 (just as the Revolutionary War was beginning in earnest) before going on to study law in Schenectady, New York.

In 1777, Isaac Tichenor moved to Bennington, Vermont and served the colonial military as an Assistant Commissary General during the American Revolution. He was also a Captain in Colonel Ebenezer Walbridge’s militia regiment—Walbridge originally an officer in Seth Warner’s regiment of the famed Green Mountain Boys, led by Ethan Allen.

Tichenor was also an agent from the Vermont Republic to the Continental Congress and presented Vermont’s request for admission as a state to the Union from 1782 to 1789. Vermont would be admitted to the Union in 1791. Along with serving in the Vermont Supreme Court and as the third and fifth Governor of Vermont and a United States Senator from Vermont, he was a member of the Vermont House of Representatives from 1781 to 1784 and served as Speaker of the House in 1783. Throughout his career he was politically a Federalist.

This side by side shotgun was originally made in the flintlock format at the end of the 18th Century or beginning of the 19th. Flintlock guns were being updated to the new and improved percussion cap firing system as early as the 1820s and this is one such example. A bolster conversion was utilized on this piece. This shotgun’s stock curves gracefully at the hand-checkered wrist. The butt plate is substantial and features a border along the outside with a floral design on the top tang. The barrel tang, trigger guard, finial, and ramrod tube likewise bear bouquet engraving. The stock is carved behind the trigger guard with large scallops. This would have made a classy flintlock and then percussion gun for the field or the marsh in the late 1700s. It comes with copies of a signed and notarized document explaining briefly that:

The owner of this gun was Isaac Tichenor who served as the second governor of the state of Vermont from 1797 to 1808, and as United States senator for three terms until 1821…The Heir to Tichenor Place was his niece and adopted daughter, Catherine Lyman, who was my great grandmother. The gun belonging to Governor Tichenor was put in the hands of my grandfather by his father, George Lyman, who was the husband of Catherine, with the admonition that he take good care of it”. The gun has been in our family ever since.

Also included is a copy of a photograph with an elderly lady holding the gun.

The overall condition is good. The iron parts are dark with age with much weathering. The engravings are clear. The stock is beautifully carved and has a couple old repairs. The bores are smooth with a thick layer of dust. The actions are strong. Here is an old gun with provenance to a Federalist politician from Vermont who fought during the Revolution. It was owned by the family at least up until 1980 and it looks like it just came out of the attic!