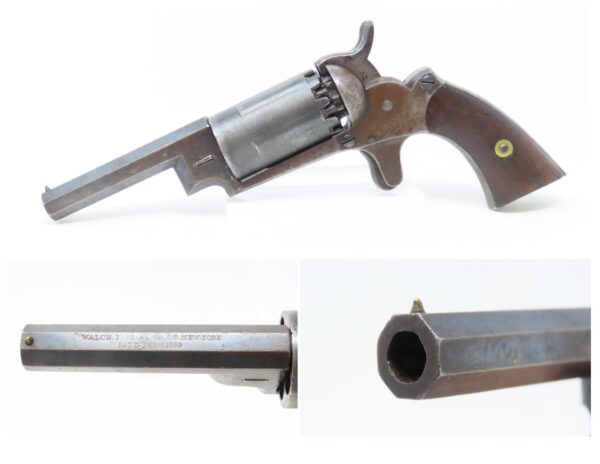 Circa 1860-62 Antique Pocket Revolver; Made by New Haven Arms

Here we present a scarce antique New Haven Arms Co. Iron Frame Walch Superposed Load Pocket Revolver, made in 1860-62 in New Haven, Connecticut. These 10-shot pocket revolvers and the larger Navy Model 12-shot revolvers were manufactured around the early 1860s. The pocket model, as is this one, was manufactured by the New Haven Arms Co. for John Walch’s Walch Fire-Arms Co. of New York City alongside the famous Henry rifles. Only around 1,000 of the 3,000 Walch pocket revolvers were manufactured with iron frames that were found within the 1,500 to 3,000 serial number range.

On February 8, 1859, John Walch of New York City received US Patent #22,905 for a somewhat unique revolver that fired superimposed loads from its cylinder, thus doubling the number of times the revolver could be fired before it was reloaded. Walch knew that the concept of a superimposed positioning of two or more loads in a single chamber was not a new idea and did not claim that design in his patent. In fact, the US military had experimented with the concept circa 1829 with the Ellis-Jennings repeating rifle, which was produced in both four and ten shot variants. Rather his claim ran specifically to the arrangement of two rows of nipples on the rear of a revolving cylinder allowing double loads to be fired from each chamber. His other claim referred to his trigger, which as he notes, “is on its upper end made in two parts.” Thus, a single conventional trigger appeared in the trigger guard, which had two operating parts in the frame, which allowed the release of the right and then the left hammer with two distinct pulls.

Walch had the idea but had to look elsewhere for a company capable of manufacture. He found favor with none other than Oliver F. Winchester and his New Haven Arms Co. in New Haven, Connecticut. These revolvers were made in small numbers in proximity to the famous Henry rifles of the Civil War fame. It is interesting that while both of these unique designs were concerned with increasing firepower and speed and ease of firing/reloading, one was utilizing the percussion firing system, while the other the latest and greatest in metallic cartridges—the .44 Henry Rimfire. It is clear which concepts were the most enduring.

Robert Reilly in his book “United States Military Small Arms, 1816-1865” notes that some of the Walch Pocket revolvers were acquired by the 9th Michigan and 14th Wisconsin Volunteer Infantry Regiments, but he asserts that these were certainly personal purchases and not state of Federal government purchases. As handguns were not regularly issued or carried by infantry, this seems quite logical. However, Flayderman states categorically that “One entire outfit, Company I of the 9th Michigan Infantry armed themselves with the gun, where it received favorable comment.”

The overall condition is near fine. A good amount of the blue finish remains on the iron frame with a nice, untouched patina throughout. The action is excellent. Both the hammers hold the half- and full-cock notches with crisp lockup. The cylinder revolves in time. The hammers drop one at a time when the single trigger is pulled—first the right hammer, then the left. The left hammer is the one with a small notch that passes as the rear sight as this is the one in line with the center of the gun and therefore the front sight. The bore is in good shape for the age with visible rifling. The grips show wear and the right panel has an old repair at the back. This was certainly a unique little revolver that actually saw use and was no safe queen. Nonetheless, it was well-maintained and will make a fantastic addition to the collection. Superposed single-bore muzzle-loaders had been around for a long time before Walch invented this piece, but combining it with the revolving cylinder and the single action firing system reimagined what could be done to increase firepower with the percussion system at this time.