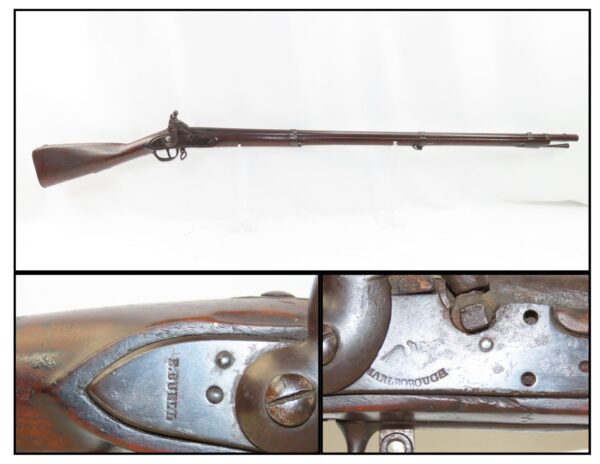 Here we present an antique U.S. Elisha Buell Contract Model 1816 Musket, manufactured circa 1830s in Marlboro, Connecticut. This is one of only a few hundred estimated to have been made. It has a very simple and effective percussion conversion that involved removing the frizzen assembly and pan, inserting a drum type of percussion bolster and nipple, and clamping a bent piece of iron in the jaws of the cock to act as a hammer. This is a type of conversion that is far less common—and far less refined and sophisticated, but not less effective—than those that received more official armory types of conversions whereby a completely new hammer replaced the cock and all holes in the lock were filled and ground down.

The War of 1812 revealed many weaknesses in American muskets. In an attempt to improve both the design and manufacture of the musket, the Model 1812 musket was created. The Model 1816 made further improvements and replaced the Model 1812. The M1816 was a smoothbore, muzzle loading weapon which used a .69 caliber musket ball. It was in production at Springfield (325,000) and Harpers Ferry (350,000) between 1816 to 1844 with around 675,000 muskets produced during this run. Additionally, more than a dozen contractors also made the Model 1816 Muskets, like this one, during its production years, adding more than 146,000 muskets for a grand total of 821,421 M1816 Muskets produced. Of the 13 contractors who made the Model 1816, Buell had the second lowest production numbers at less than 300.

It saw service during the Mexican-American War and was even pressed into service during the Civil War in both the updated percussion and the original flintlock format, due to the shortage of guns. In the 1850’s, many 1816’s went through the conversion from flintlock to percussion, which is the case with this smoothbore. These were some of the most abundant weapons available to both sides, being in the hands of state militias, in the first days of the American Civil War. This musket is symbolic for the westward expansion of the country throughout the first half of the 19th century. The Model 1816 saw service in the Texan Revolution, including the Battle of the Alamo and the Battle of San Jacinto.  After the independence of Texas, the 1816 musket was chosen as the first standard musket of the Texan army in 1839.

The overall condition is very good. Strong action. The bore is smooth and in good shape for its age. Solid walnut stock with two stable cracks beneath the lock. The right side of the butt stock has a punch dot design that may have once contained brass inserts. The design is interesting, and though it could be construed as Latin letters, we think this is either some other language or possibly just a design.