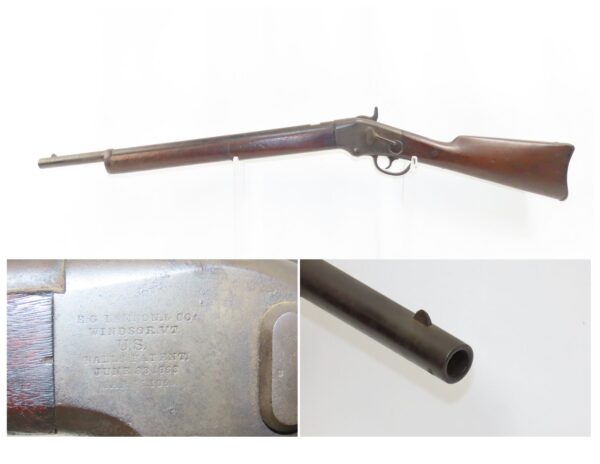 Here we present an antique U.S. Ball Patent Cavalry Saddle Ring Carbine, made circa 1864-65 by E.G. Lamson & Co. in Windsor, Vermont. This carbine was extremely well-built, not to mention technologically a step forward in firearms design. Had the American Civil War not ended when it did, this carbine might have been adopted en masse. As Providence would have it, hostilities ended just prior to the first shipment was delivered. Only 1,002 were made during its two year production run. However, what we see is a hybrid between two very important and recognizable designs: the Spencer and the Henry. Both of these made their debut circa 1860, and both were a leap forward in breech-loading firearms. Both utilized the latest in ammunition: the self-contained Rimfire. Both loaded from a tubular magazine, the Spencer was loaded from a trap in the butt plate while the Henry featured a tubular magazine under the barrel. The Henry had the edge in capacity, holding 15+1 .44 caliber rimfire cartridges, while the Spencer contained 7+1 of the more powerful 56-56 Spencer rimfire cartridge. The Henry’s action also cocked the hammer upon working the lever, whereas the Spencer’s hammer had to be cocked independently of the working of the lever.

Enter the Ball Patent Carbine, and you will see that it is essentially a Spencer Carbine with a tubular magazine that is housed under the barrel (like the Henry), within the forestock. Much of the operation of the piece is the same as the Spencer, including the independent operation of the hammer and lever, though the loading of it is much more convenient than either the Spencer or the Henry as it is done from the breech. Simply pull the knurled tip of the magazine follower and press the tab to lock it into place, open the action, and drop cartridges into the breech-end of the magazine tube. Let the magazine follower go and the carbine is ready to go!

This piece has the same capacity as the Spencer and used the same ammunition. Build quality was very high and you will be impressed with how smooth the action is and how it feels better balanced than the Spencer. Clearly this was the firearms industry was going with repeating rifles, and this late-Civil War carbine indicates just that.

The overall condition is good. Strong action. The bore is in good shape for its age. Solid stock contains average wear. The middle barrel band is absent. A cartouche can be seen on the left wrist. A barrel tang screw is missing. Legible markings. No rear sight.