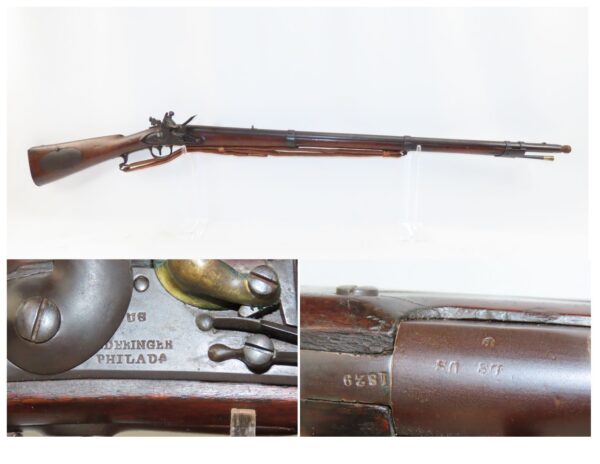 Here we present an antique U.S. Model 1817 “Common Rifle” from the Henry Deringer Contract, made circa 1829 in Philadelphia, Pennsylvania. The Model 1817 common rifle (also known as the Deringer M1817 rifle) was issued due to the Dept. of Ordnance’s order of 1814, produced and used from the 1820s to 1840s on the American frontier. Like the Model 1814, it had a large oval patch box in the buttstock. Many of these were used during the American Civil War, especially in the early days of the conflict when military weapons were hard to come by.

While these were great rifles they were never made in massive quantities such as the Model 1816 smoothbores. While all were originally flintlocks, most were converted to percussion cap for their firing mechanism. Many were used during the American Civil War.

The overall condition is near fine. Excellent action. The bore is in great shape for its age with sharp rifling. Solid walnut stock with a cartouche on the left wrist. Spare flints and cleaning tools are included in the patch box. “US” marked barrel, butt plate tang, and lock. Clear markings. “1829” dated lock and barrel tang. This example sports a nice leather sling and there is a peep sight (that is removable) at the top tang.