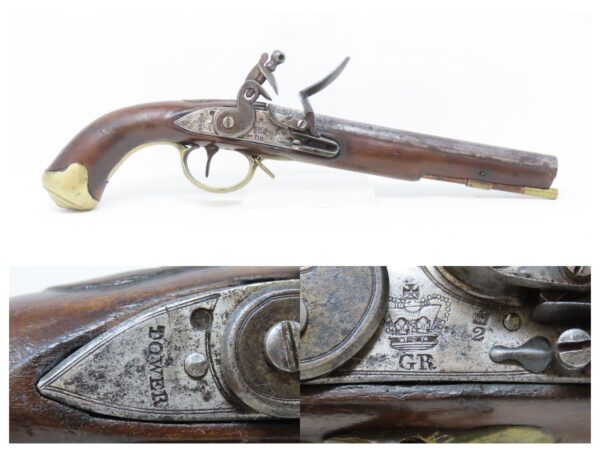 Here we present an antique British Light Dragoon Flintlock Pistol, made circa the mid to late-18th Century. Light Cavalry in the British Army began to be more highly developed and organized during this very period of the middle 1700s.

By the 18th century, cavalry represented one of the three basic troop types of any European army, along with the infantry and artillery. Mounted troops came in a variety of different types, depending on the role that they played on the battlefield. Light cavalry rode small quick horses and carried light weapons ideal for scouting and skirmishing. Heavy cavalry, including cuirassiers and lancers, on the other hand, were often armored and were mounted on strong powerful horses which they used to smash and break enemy formations in close combat.

Potential conflicts this pistol may have seen include the Seven Years War (1754-63), French & Indian Wars (the North American extension of the Seven Years War), the American Revolutionary War (1775-1783), the French Revolutionary Wars (1792-1802), the Irish Rebellion of 1798, and the Napoleonic Wars (1803-1815). It features London proofs on the left side of the barrel with “HM” between. The lock is marked “TOWER” at the tail and has King George III’s royal cipher in the middle (GR for Georgius Rex).

The overall condition is good+. The action is strong. Good smooth bore for age. The stock has been grafted at the bottom of the grip. The joint is pretty difficult to make out unless you are looking for it. There is the addition of a little lanyard ring at the front of the trigger guard bow, certainly not standard. A very nice specimen of British weaponry from the mid-18th Century!