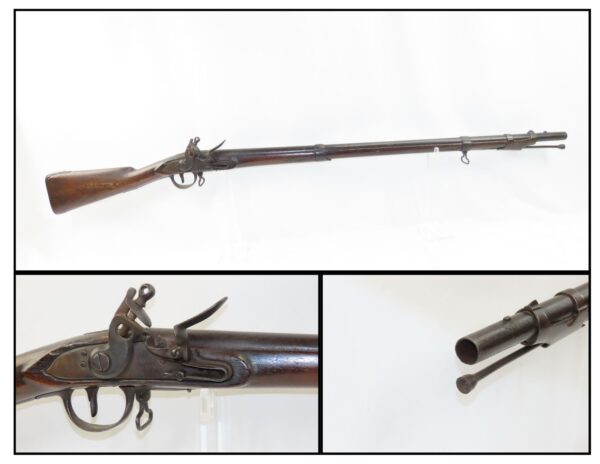 Here we present an antique Charleville/U.S. Model 1795 Flintlock Musket, manufactured circa the late 1700s to early 1800s. The Springfield/Harpers Ferry Model 1795 was a smooth bore, flintlock based musket and the first weapon system to be produced within the United States. It was designed very closely patterning the French “Charleville” Flintlock Musket that was used by the colonists against the British during the American Revolutionary War.

The Springfield Armory produced 80,000 of these muskets, with Harpers Ferry responsible for another 70,000. Production of this musket ran from 1795 through 1818. She found her way into some several important American conflicts of the time, including the War of 1812 between the United States and the British Empire, the Mexican-American War, and even the Civil War. The 1795 would also be taken along by members of the American expedition led by Lewis and Clark from 1803 to 1806. Use of the 1795 was recorded as late as 1865 for the southern Confederate forces who were still fielding her late in the Civil War.

The overall condition is good. Strong action (reconverted and flash hole repairs). The bore is smooth with a dark patina. Original finish/patina on the exterior surfaces. Iron hardware. Mostly solid walnut stock with commensurate wear for the time period and use (minor dents and dings). The very front end of the stock has an old crack that follows the ramrod channel. The barrel was probably trimmed back very long ago, as evidenced by wear and patina. The stock looks to have been shortened at some point as well. The trigger guard has a cracked tang and there is both a very old staple and a tack to secure the finial at the front. The left stock flat has a very faint “V” view marking. There is also a faint “WR” just behind the trigger guard tang. A very well-used example of a scarce early-American longarm!