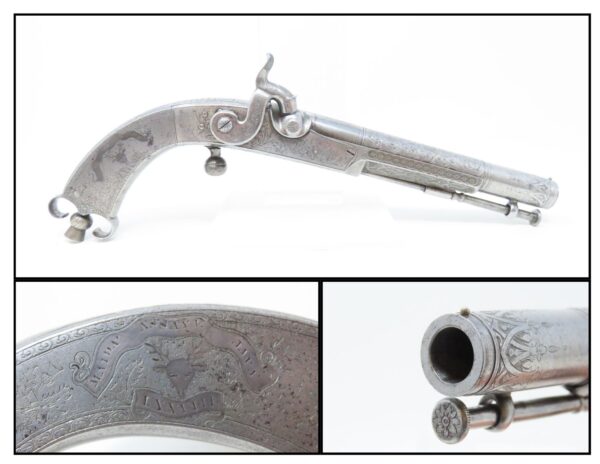 Here we present an antique Scottish Ram’s Horn Pommel Belt Pistol Engraved with references to the 78th Highlander Regiment of Foot and some of their key battles, made circa the early-19th Century. These battles include the Battle of Assaye (1803), Battle of Maida (1806), and the Battle of Java (1811).

This pistol is characteristic of the sidearms for which the Highlanders were known. It features a completely metal construction, a ram’s horn type pommel, a belt hook, and a ball-shaped trigger. It is engraved throughout. The muzzle engraving consists of an intertwined wave-like motif, the top of the barrel consists of profuse scroll engraving. Moving to the stock, the sides of the fore stock have infinity chains that are laid in silver. The bottom of the fore stock, the lock plate, and the grip have been engraved with oak boughs with bell-shaped acorns. Rather than the very popular punch-dot background, these engravings have a series of very thin lines behind them to create contrast. Finally, each side of the grip is engraved with an identical 12-point stag with a banner above and below. The bottom banner is inscribed “LXXVIII”, the Roman numeral for “78”, and the top banner lists “MAIDA ASSAYE JAVA”, which were 3 major battles (and victories) for the 78th Highlander Regiment of Foot.

The 78th Highlanders Regiment was raised in 1793 and continued until 1881. The battle of Assaye was fought during the Second Anglo-Maratha War in India in 1803. Here the 78th fought under Major General Arthur Wellesley (later the Duke of Wellington of Waterloo Fame). The Brits were vastly outnumbered and took heavy casualties but beat the Marathans back so that they lost many of their big guns. The Battle of Maida was fought between the British and the French in Italy in 1806, during the Napoleonic Wars, in which two similarly sized forces squared up and the British won decisively with few casualties while inflicting heavy casualties. Finally, the Battle of Java in 1811, also during the Napoleonic Wars, saw British forces take Java of the Dutch East Indies, which France had taken in a roundabout way when they captured the Kingdom of the Netherlands in 1806. A series of amphibious assaults saw the British to victory and they held the island before restoring it to the Dutch in 1814 after the war ended. This is just the briefest of excerpts. Volumes could be read about any one of these battles, not to mention the entire history of the 78th!

The overall condition is fine. Excellent action. The bore is smooth and in good shape. This pistol is a very scarce example of the Scottish Ram’s Horn Pistol with exquisite engraving and historical reference to the 78th Highlanders’ and their victories!