Two weeks ago my father-in-law, both brothers-in-law and I had the pleasure of going to Pheasant Run Ranch in Lebanon, Kansas for a fantastic upland bird hunt. All of us share the love of the outdoors and the pursuit of wild game. Perhaps that is part of why we get along so well.

I was anticipating this trip very much since I had not gotten out to duck hunt this year, and I foolishly passed up a worthy buck during rifle season in Missouri. My freezer was looking rather empty.

I was also looking forward to this trip because I had (and currently still have) a very nice Parker PH Grade Double Barrel Shotgun, made in 1892, in my inventory. I had only ever used modern shotguns to hunt or even shoot clays, so I was chomping at the bit to use this American classic. In preparation, I began scouring the internet to figure out how to make very sure the gun was safe to shoot and what kind of ammunition it needed. 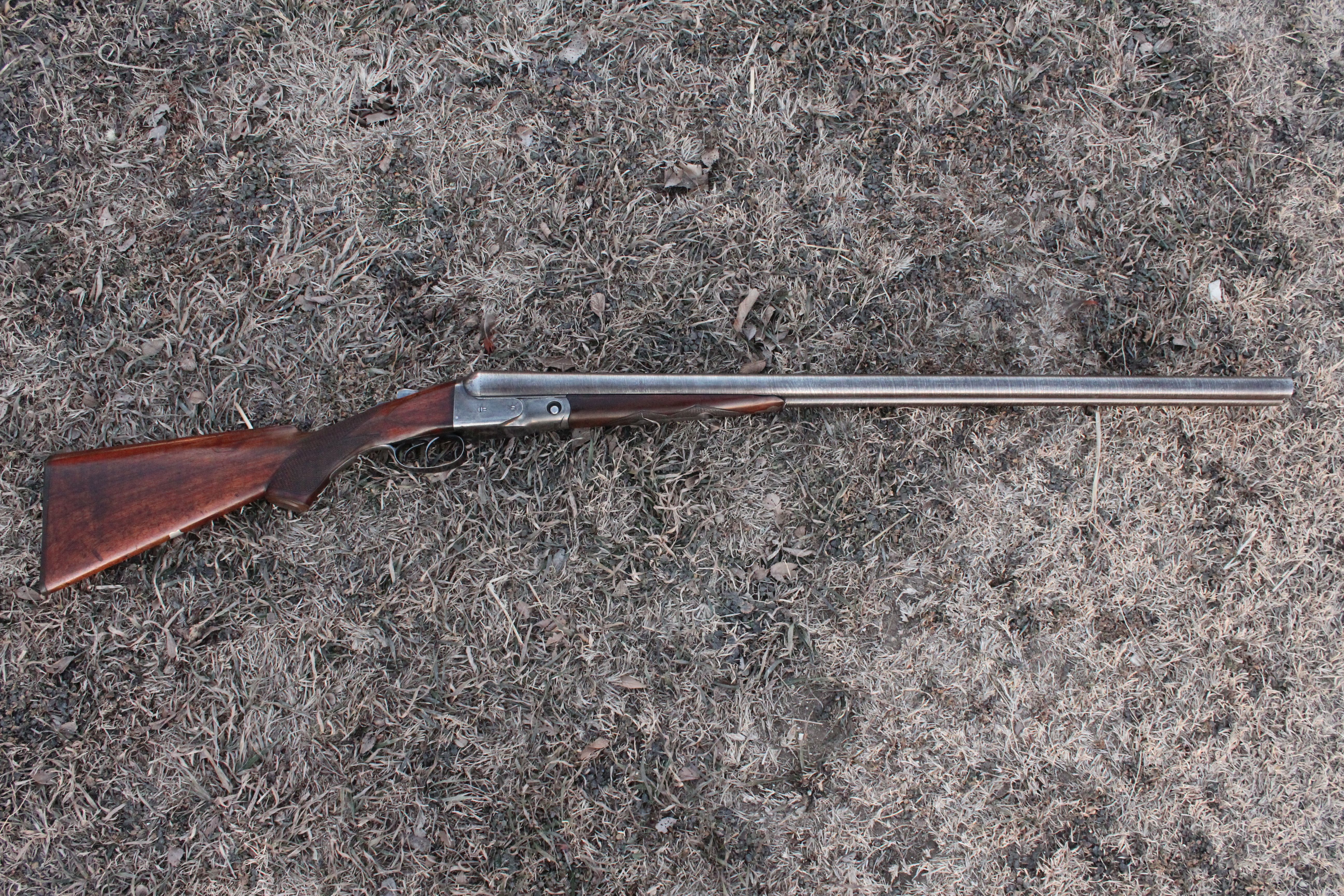 In order to make sure the shotgun was safe I closely examined the barrels. In all honesty, I was as concerned for the shotgun as I was for myself. The thought of destroying a treasure like this haunted my dreams. The bores were shiny, the rib was firmly attached and without any wavers; there was no sign of damage inside or out. I rung the barrels lightly with a small brass hammer to make sure that they indeed “rang”–the sound of a worthy set–and didn’t “clunk”–the sound of a loose rib. I also made sure that the back of the barrels mated nicely with the breech face. The lever locked everything up nicely, the safety engaged properly and the firing mechanism was perfect.

Next, I had to find ammunition. Old shotguns were not meant to handle today’s heavier loads. There is a lot of lore out there about shooting old guns with twist barrels, so I really wanted to be careful about what I put through it. I was, however, confident that Parker made a fantastic shotgun and that the quality of yesteryear would acquit itself today. Of considerable note was the fact that the chamber lengths for this 125 year old 12 gauge shotgun was 2-5/8 inches, instead of our modern standards of 2-3/4, 3 and 3-1/2 inch.

After much research, I found that RST’s Best Grade shotshells were just what I was searching for and purchased their 2-1/2 inch 6 shot with a paper shell and a fibre wad. These shells are made for guns like this.

Unfortunately, I did not have the opportunity to test fire the shotgun before we left, so I brought along my favorite Browning A5 20 gauge that I had inherited years ago for backup. The morning of our opening hunt, I test fired the Parker for the first time. It worked! I could tell right away that I was going to have to get used to several differences: 1) the bores were permanently choked with the left being modified and the right full, 2) two triggers fired their respective barrel and 3) the safety automatically engaged when the breech was opened.

We began our hunt and I made sure to keep my thumb on the safety at all times, so that I would not forget to disengage it when shots presented themselves. I also resolved to try to shoot the left barrel first and use the right barrel when the bird was further away.

Well, it was challenging, but a success! I never once missed a shot opportunity due to leaving the safety on. The biggest challenge was coordinating which trigger to use. For whatever reason, it was simply more natural and therefore faster to use the front right trigger first, meaning that I was using a full choke at shorter ranges than I would have preferred. Nevertheless, I killed birds with the rest of them and even made some good shots!

Overall, the trip was fantastic, if too short. Especially in Missouri, Kansas gets a bad rap for just about everything, including scenery. I thought that it was beautiful and refreshing to see new ground and savor the remoteness of the ranch. We killed our limit of pheasant both days and shot quail when we could. Our accommodations were fabulous as we were put up in a spacious cabin with hunting right outside the door. We cooked for ourselves and ate like kings. The guide and his dogs were very good, and he really knew the many acres that we walked. When we missed a bird and it flew into a part of the field yet to be driven, he was confident that we would get him in the end–and we did.

It really was an unforgettable trip with family that I can truly call friends. For me, the entire experience was enhanced by using the Parker, acting out what I had seen in film for all these years. 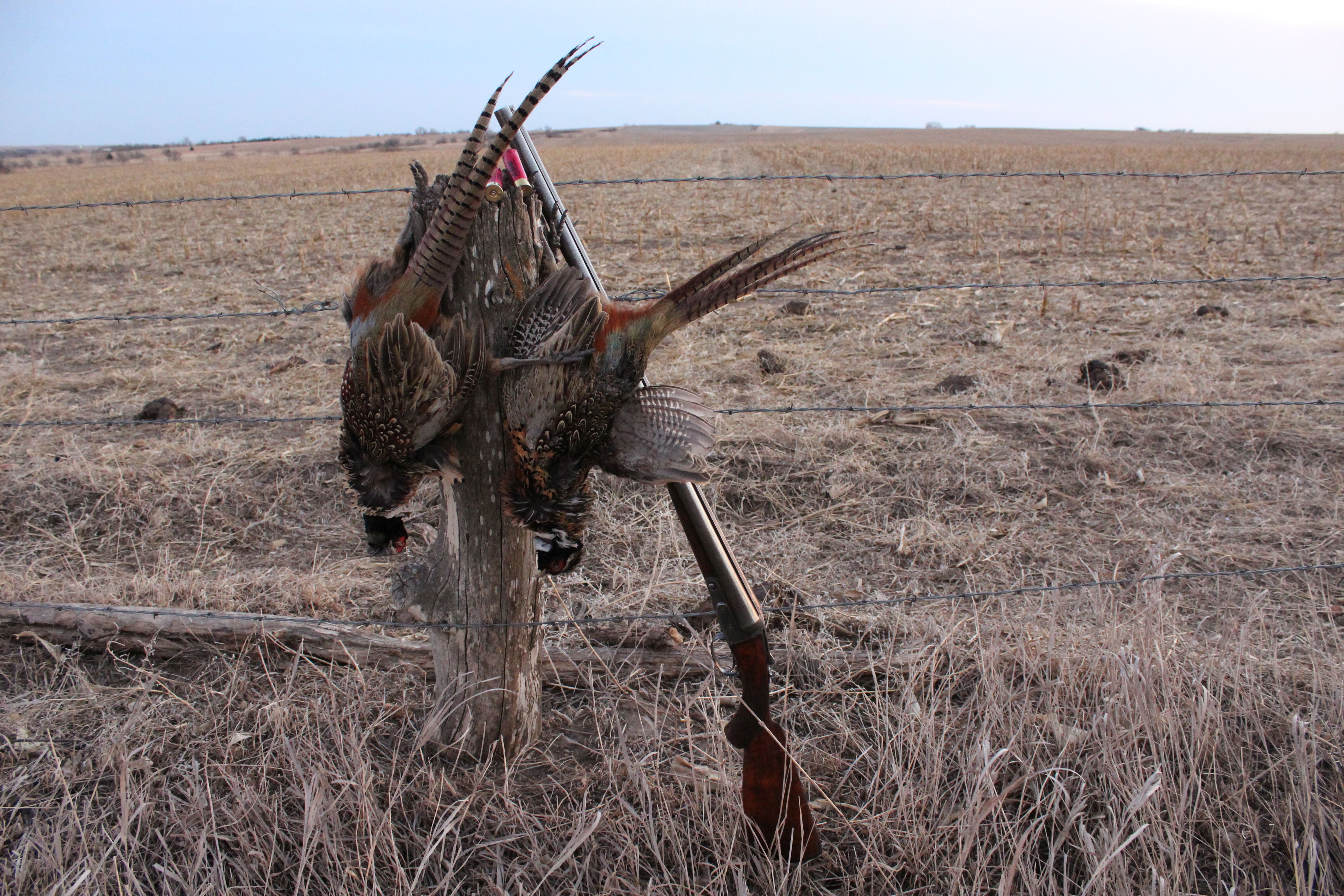