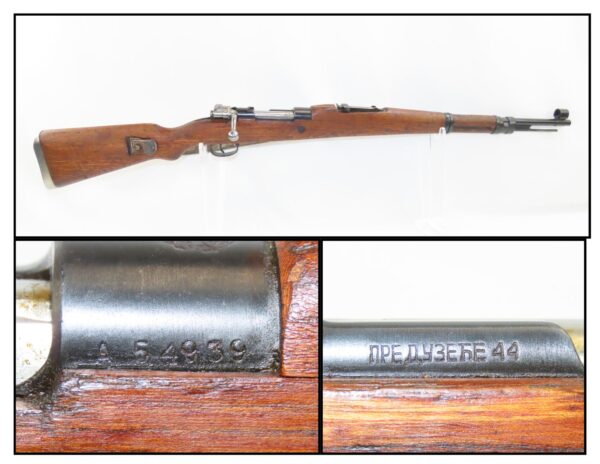 Here we present a Yugoslavian Mauser Model 48 Rifle, made circa 1950 to 1952. This rifle is a post-World War II Yugoslav version of the German Karabiner 98k designed by Mauser. It was the standard service rifle of the Yugoslav People’s Army from the early 1950s until its replacement by the Zastava M59/66, a licensed copy of the Soviet SKS semiautomatic carbine, in the early 1960s.

During World War II, Germany had absorbed the Yugoslavian government’s inventory of Mauser rifles into its military and had stripped the Military Technical Institute, Kragujevac (the forerunner to the Zastava Factory Complex) of most useable machines for use elsewhere in the Third Reich’s armaments industry. After the war’s conclusion, Yugoslavia had effectively no remaining capacity to build complete rifles and the technology to do so had to be redeveloped. Consequently, Yugoslavia acquired the necessary machines to manufacture rifles outside their country, most notably with captured German machines in the Soviet Union. Based on prototyping that began in 1948, in 1950 the Model 48 Mauser was finalized and adopted for service. The Model 48 remained in production for only 3 years before being replaced by a simplified version known as the Model 48A with a total manufacturing run of 238,515 between 1950-52.

The overall condition is very good. The action functions well but will need to be cleaned of the cosmoline. This example has maintained a bright bore with sharp rifling. The leather sling is in good shape.