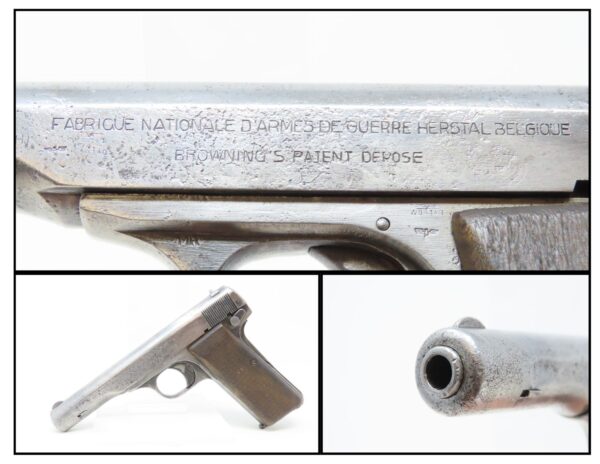 Belgium Made; Designed by John Browning

This example has Nazi production stamps, and like most has simple checkered wood grips instead of the earlier horn or plastic grips bearing the FN logo. While the Model 1910 was widely sold on both civilian and military markets, the Model 1922 was considered specifically a military and police pistol, with FN offering it to individual civilians only by special order. Compared to the Model 1910, it was a larger model with a longer barrel, slide extension, and a longer grip frame to accommodate an extra two rounds.

Historically speaking, an FN Model 1910, serial number 19074, was the handgun used by Gavrilo Princip to assassinate Archduke Franz Ferdinand of Austria in Sarajevo on June 28, 1914, the act that precipitated the First World War. During both World War I and World War II, the FN 1910 was used by the militaries of Germany, Belgium, the Netherlands, France, Finland, and Japan.

The overall condition is good. Lots of external wear. Strong action. Bright bore. Both grips have a little movement and contain an expected amount of wear. Numbers match. Clear, legible markings. A well worn sidearm for the Third Reich during the Second World War!