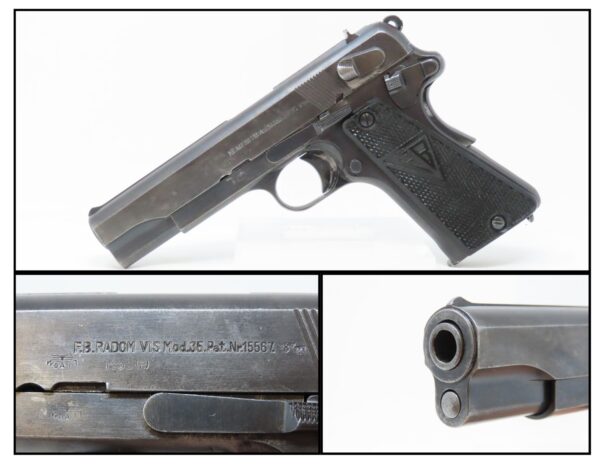 One of the Best Sidearms of World War II

Here we present a C&R Nazi-Occupation Polish “Radom” Vis 35 Pistol, made circa 1943 at Fabryka Broni in Radom, Poland. The Radom is considered one of the best sidearms of World War II. It very much reminds one of a Model 1911 or a Browning High Power, and it shares many of the features in addition to some that are unique to the Radom. After the invasion of Poland by the Third Reich in 1939, production of these pistols was restarted, so that by 1945, the Radom was the third most prevalent sidearm in German service. The factory at Radom was also famous for its sly resistance efforts to the Nazis as they duplicated serial numbers on guns to deliver them to resistance fighters outside of the factory.

Its design was inspired by American firearms inventor John Moses Browning’s 9mm “Browning GP” pistol which was completed after Browning’s death by designers at Fabrique Nationale in Herstal, Belgium. Production of the Vis began at the Fabryka Broni arms factory in Radom in 1935 and was adopted as the standard handgun of the Polish Army the following year. The pistol was valued by the Germans and towards the end of the war issued to German paratroopers. The Vis is highly prized among collectors of firearms.

The overall condition is fine. Very nice blue finish. Excellent action. Bright bore with sharp rifling. The grips are in great shape. Numbers match. Here is a great example of one of the best pistols of World War II, from occupied Poland!