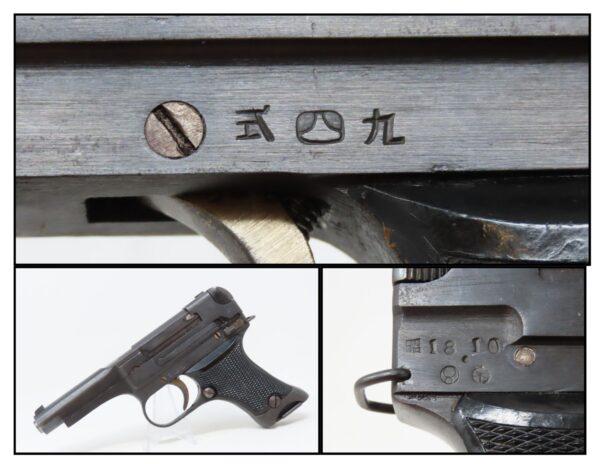 Here we present a World War 2 Imperial Japanese Kokubunji Type 94 Service Pistol, made in October of 1943 under the supervision of the Nagoya Arsenal by a firm named Chuo Kogyo. These guns are often referred to as “Kokubunji” because Chuo Kogyo’s factory was located in the Tokyo suburb of that name. These were made specifically for the Imperial Japanese Army and designed by none other than the famous Japanese designer Kijiro Nambu. They were chambered in the 8x22mm Nambu, with 6 round magazines. To say that it is unique is an understatement. Some have even called it, “the worlds ugliest gun” and “the suicide gun.”  It is in fact known for its less than handsome looks, and most of all, its ability to fire by pressing the transfer bar on the side of the gun without having to press the trigger. However, it was a successful pistol for the Japanese fighting in the Pacific Theater and was made through the end of World War II.

The markings on the left side of the pistol frame read “Type 94”. Those on the right side “18.10” indicate that this gun was made during October of the 18th year of the Japanese Showa calendar, 1943.

The overall condition is fine. The action is robust. The bore is bright in very good shape. All the markings are clear and legible. Both grips are in fine shape. Here is a fantastic WWII Japanese revolver to collect and display!