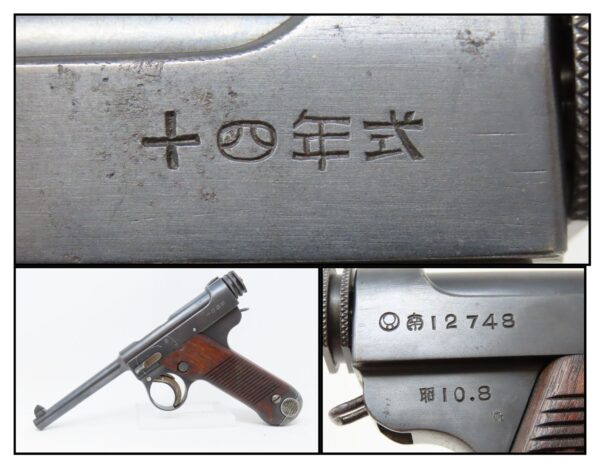 Here we present a World War II Japanese Type 14 Nambu Pistol, made in August of 1935 under the supervision of the Nagoya Arsenal by a firm named Chuo Kogyo. These guns are often referred to as “Kokubunji” because Chuo Kogyo’s factory was located in the Tokyo suburb of that name. This pistol is a fantastic original example of what a Japanese soldier would have used during World War II in the Pacific Theater. The Nambu pistols were designed by Kijiro Nambu and saw extensive service in the Empire of Japan during the Second Sino-Japanese War and Pacific War.

The most common variant, the Type 14, was used mostly by officers, who had to pay for their pistols themselves. Towards the end of the war, the production quality began to decline in order to speed up manufacture. Nambu pistols were noted for their lack of reliability and stopping power compared to other handguns being fielded by other nations at the same time, such as the U.S. M1911 and Germany’s Walther P38. The Type 14 was the final iteration of Kijiro Nambu’s original design, adopted in the 14th year of Taisho Japanese calendar, which was 1925. It was simple and unique in many ways to other combat pistols during the war. It was chambered for the 8mm Nambu cartridge, which was a bottlenecked 8x22mm, and held 8 rounds in the magazine.

This pistol is dated “10.8”, meaning that it was made in “1935 August” or the 10th year of the Japanese Showa calendar with the month being represented by the second number.

The overall condition is fine. Original finish. The action is strong. The bore is bright and in very good shape. Both grips are in nice shape and remain seated firmly. All visible numbers match with the exception of the magazine. Here is a wonderful piece of Japanese WWII history for collection and display.