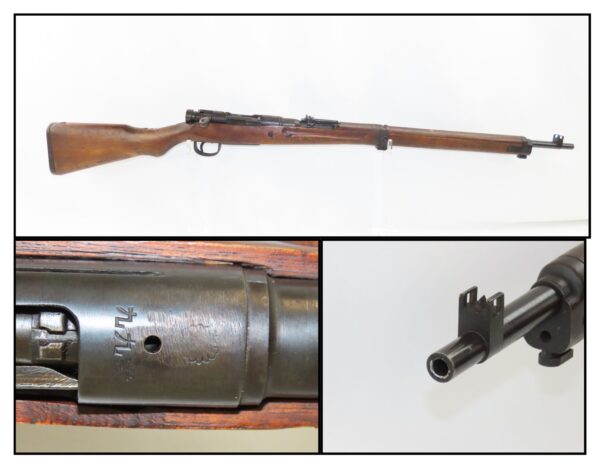 Manufactured at the KOKURA ARSENAL in Kokura, Japan.

Here we present a Japanese Kokura Type 99 Arisaka Military Rifle manufactured circa 1943 at the Kokura Arsenal in Kokura, Japan. The Type 99 was one of the standard bolt-action combat rifles to be used by the Japanese Empire during World War II. At the start of its production, it proved a reliable and robust rifle. But, the closing noose of the Pacific Theater soon brought about dramatic changes in its production methods, often leading to a subclass weapon. The Type 99 had several variants that included the Short Rifle, Long Rifle, an airborne variant and a dedicated sniper model. Production lasted from 1939 into 1945 before ending with Japan’s surrender.

The arsenal was established in 1916 as the Kokura Arms Factory and was one of six arsenals under the control of the government. Interestingly, this arsenal was the backup target of the US’s first atomic bomb and the main target of the second. However, the arsenal could not be bombed due to it being obscured by smoke and clouds from firebombing missions, so the US ended up bombing Nagasaki instead. Shortly after the Japanese surrender, the majority of the Japanese arsenals were forced to close and sequestered by the American forces.

Despite the respect that the rifle earned early on, the Type 99 suffered from quality control towards the end of the war with the Japanese Empire struggling to survive. Raw materials and competent production processes were both in short supply resulting in poor quality and finishes on most of the outgoing Arisaka rifles including the Type 99, thus being referred to as a “Last Ditch Effort”. Some were shipped without finishes of any kind while others had their rear sites wholly replaced by a more basic and fixed system. Additionally, the machining process involved in the internal components often led to the rifle being quite dangerous to fire for the operator for the core components were poorly produced. As Japanese surrender became all the more imminent, many Army rifles bearing the Imperial Chrysanthemum marking of the Emperor had this emblem grounded down in 1945 to spare the Emperor the embarrassment of surrender. Many surviving rifles are often found with this particular condition, especially late-war/late-model model production versions. This example has the mum intact.

The overall condition is good+. The action is strong. The bore is bright. The mum is partially ground but still visible. The numbers on the receiver and bayonet lug match (1662), while all the numbers on the bolt assembly match (270). Here is a fantastic piece to collect and display.