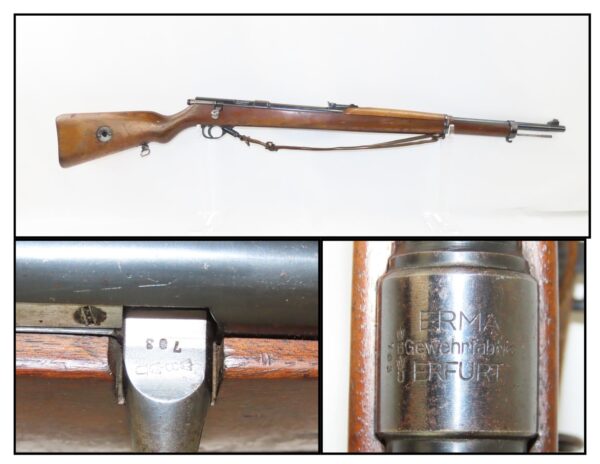 Here we present a German Erma Erfurt Single Shot .22 LR Training Rifle from Erma Gewehrfabrik made circa the 1930s in Erfurt, Germany. Target shooting clubs were popular long before the Great War and their existence aided the Third Reich in preparing for the Second World War. There were limitations on military arms so .22 rimfire arms were the answer. This is a rifle that basically duplicates the handling of a Mauser k98.

The Erfurter Maschinenfabrik (ERMA) was a German weapons manufacturer founded in 1922 by Berthold Geipel. Prior to and during World War II it manufactured many firearms, including the Karabiner 98k, the MP40 and other submachine guns. It is also noted for having produced several forms of military training rifles, including the famous EL 24 subcaliber “Barrel Insert” training devices that allowed .22 long rifle ammunition to be fired from infantry rifles such as the Karabiner 98 and Steyr-Mannlicher M1895 through use of a special action conversion kit and a thin-walled .22 caliber barrel inserted within the larger rifle’s bore.

The overall condition is nearing fine. Fine original blued finish. The action is robust with a smooth bolt pull. Very nice target trigger. This example has maintained a bright bore with sharp rifling.  The stock is sturdy. There is a duffel cut under the barrel band and no import marks, signs of a WWII GI bringback. The leather sling is in good shape and clearly very old. This is a wonderful rifle and an awesome piece to add to your World War collection and arsenal!