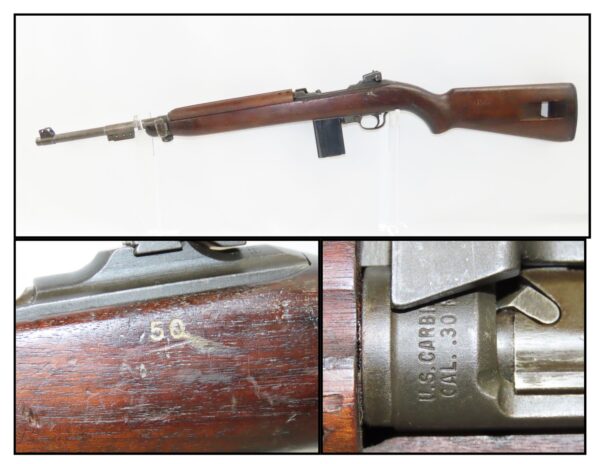 Here we present a Standard Products U.S. M1 Carbine Semi-Automatic Rifle, manufactured in 1944 in Port Clinton, Ohio. This .30 caliber semi-automatic rifle was first used by the United States Armed Forces on October 22, 1941. Of the 6,110,730 carbines made of all types built during the war, Standard Products manufactured 247,160, or 4% of the total between 1943 and 1944. Standard Products M1 carbines are one of the scarcest contractor carbines made. This example is equipped with an Underwood barrel. Underwood shipped approximately 10,000 barrels to Standard Products in 1943. Despite having similar name and appearance, the M1 Carbine is not a carbine version of the M1 Garand rifle. They are different firearms and use different ammunition.

The overall condition is very good. The action is strong all around. The bore is bright. The visible markings are clear and legible. “AI” is marked on the magazine. “OI” can be seen stamped into the sling well, representing S.E. Overton of Inland. The receiver serial number matches the stamps on the left buttstock. The right side of the butt stock is painted with “157”, probably a rack number. The Underwood barrel is dated “2-44”. Here is a great example of WWII history to collect and display!