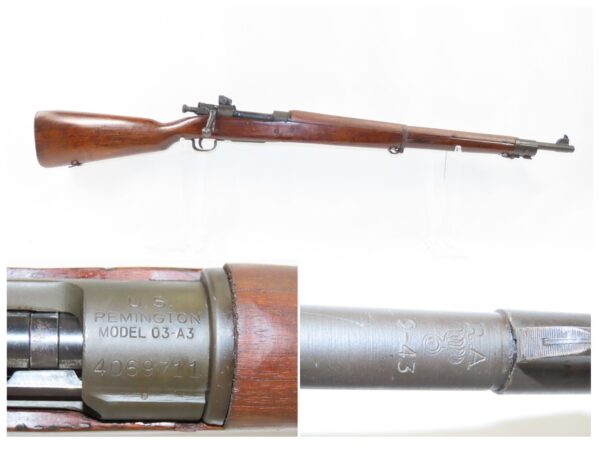 Made in 1943 with FLAMING BOMB Marked Barrel

Here we present a Remington U.S. Model 1903A3 Bolt Action Infantry Rifle, made in 1943. The Model 1903 was, of course, officially adopted by the United States military on June 19, 1903. It was issued en mass during World War I through World War II. It was officially replaced as the standard infantry rifle by the faster-firing semi-automatic eight-round M1 Garand starting in 1936. However, the M1903 Springfield remained in service as a standard issue infantry rifle during World War II, since the U.S. entered the war without sufficient M1 rifles to arm all troops. It also remained in service as a sniper rifle during World War II, the Korean War, and even in the early stages of the Vietnam War. It remains popular as a civilian firearm, historical collector’s piece, a competitive shooting rifle, and as a military drill rifle. This rifle would have been issued during World War II and very likely used in combat.

The overall condition is very good. Robust action. Bright bore with sharp rifling. The stock is solid with less than expected wear. “9-43” dated barrel. “RA-P” is marked on the left buttstock. Nicely Parkerized.