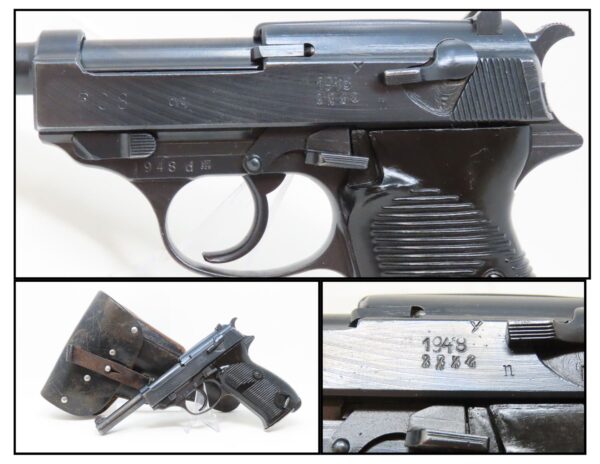 Here we present a Third Reich German Spreewerke “cyq” code P38 Pistol, made in June 1943, with Soviet Capture Mark. The P38 was designed by Walther to replace the Luger P08 as the standard service weapon for the Third Reich’s Wermacht. The Luger was a ground-breaking design, but quite expensive to produce. The P38 was the first locking breech pistol to feature the double/single action firing mechanism with a decocking safety lever, a prelude to many modern pistols to come. It also features a loaded chamber indicator that is both visible and tactile, extending out of the top rear of the slide, just above the hammer. The falling block locking mechanism was also carried into future pistol designs. Many of these design features are found in the Beretta 92 or U.S. M9 pistols.

The Wermacht, which was the unified armed forces of Nazi Germany from 1935 to 1945, was the primary buyer of these pistols, but the German police also used about 6,800 P38s. The left side of the slide is marked “P.38” and “cyq”, the code for Spreewerke. The frame and slide bear the acceptance marks “Eagle/88”. The grips are Julius Posselt’s resin grips.

The overall condition is very good. The action is strong. The bore is bright. This example showcases Russian capture “X” marks on the renumbered slide. German eagles are present on the right slide and the left trigger guard. The holster is in very good shape. Here is a nice example of the Nazi German pistol that was to replace the iconic Luger!