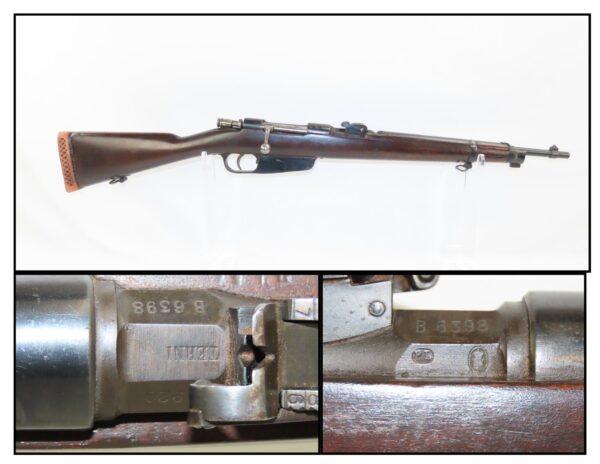 Here we present a Italian Terni Arsenal Carcano Model 1891/28 Carbine, manufactured circa 1929 at the Italian Military Terni Arsenal. This is a variant of the Model 1891 Carcano. Carcano is the frequently used name for a series of Italian bolt-action, magazine-fed repeating military rifles and carbines. Introduced in 1891, this rifle was chambered for the rimless 6.5×52mm Carcano round. It was developed by the chief technician Salvatore Carcano at the Turin Army Arsenal in 1890 and was originally called the Modello (model) 91 or simply M91. Successively replacing the previous Vetterli-Vitali rifles and carbines, the M91 was used in both rifle (fucile) and shorter-barreled carbine (moschetto) form by most Italian troops during World War I and by Italian and some German forces during World War II.

This Moschette Modello 1891, or more commonly referred to as the Musketoon Model 1891, was chambered in 6.5×52mm and sported an integral folding bayonet and a 17.7 inch barrel. These were initially made to be issued to Cavalry Troops but were however issued to other troops as well, such as the Carabinieri Reali, Bersaglieri Ciclisti and later to the Paratroopers and the MVSN Troops. After reports of inadequate performance at both short and long ranges during the campaigns in Italian North Africa (1924-1934), and the Second Italo-Abyssinian War (1934), the Italian army introduced a new short rifle in 1938, the Model 1938, together with a new cartridge in 7.35×51mm caliber. However, the Italian government was unable to successfully mass-produce the new arms in adequate quantities before the onset of World War II, and in 1940, all rifle and ammunition production reverted to 6.5 mm, but no 7.35 mm Mod. 38 rifles nor carbines were ever re-barreled to the old 6.5×52mm caliber.

The overall condition is good. The action is robust and tight with a smooth bolt pull. The Metford style rifling is semi-bright. At some point in time the rubber buttplate was added. “T/0034” is lightly stamped on the left side of the buttstock. The stock has seen some use but remains solid all around. Here is a great Italian carbine for display in the collection!