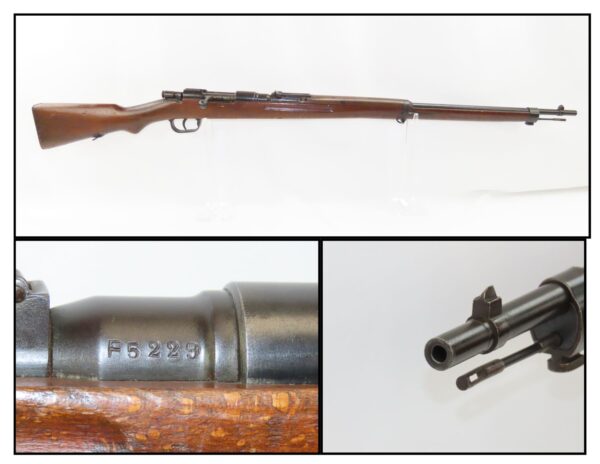 Manufactured in ITALY Under Contract for JAPAN!

Here we present a Japanese Carcano Type I (the “I” is for Italian, not a number) Navy Rifle, manufactured between 1938 and 1941. Approximately 120,000 Type I rifles were produced in 1938 and 1939, with 30,000 each manufactured by Beretta and Fabbrica Nazionale d’Armi, and 60,000 manufactured by the state arsenal in Gardone Val Trompia. After the invasion of China in July 1937, all Arisaka Rifle production at the national armories was required for use of the Imperial Army, so under the terms of the Anti-Comintern Pact, the Imperial Navy contracted with Italy for this weapon in 1937.

The Type I is based on the Type 38 rifle and utilizes a Carcano action but retains the Arisaka/Mauser type 5-round box magazine. The Type I was utilized primarily by Japanese Imperial Naval Forces. It is chambered for the 6.5 x 50 mm cartridge. The final shipment to Japan left Venice by submarine in 1941. The Type I never had the Japanese Imperial Chrysanthemum markings. Many Type I rifles brought back to the United States as War Trophies were reportedly captured at Kwajalein Atoll, the Philippines, or from Japan at the conclusion of hostilities.

Carcano is the frequently used name for a series of Italian bolt-action, magazine-fed, repeating military rifles and carbines. Introduced in 1891, this rifle was chambered for the rimless 6.5×52mm Carcano round. It was developed by the chief technician Salvatore Carcano at the Turin Army Arsenal in 1890 and was originally called the Modello (model) 91 or simply M91.

The overall condition is very good. The action is strong all around. This exampled has maintained a bright bore! The stock is solid. Here is quite the interesting piece of Japanese-Italian history that saw service during the Second World War in the Pacific!