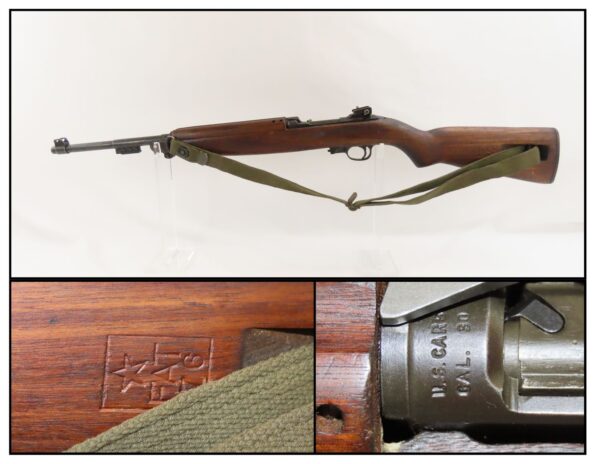 Made by the “Inland Division” of GENERAL MOTORS

Here we present an Inland U.S. M1 Carbine Semi-Automatic Rifle, manufactured in 1945 at the Inland Division of General Motors in Dayton, Ohio. This .30 caliber semi-automatic rifle was first used by the United States Armed Forces on October 22, 1941 and Inland Division was the first of 10 manufacturers to receive an order two months later in November of 1941, and was one of the only two still producing carbines when the war ended in 1945. Of the 6,110,730 carbines made of all types built during the war, Inland made 2,625,000, or 43% of the total. Despite having similar name and appearance, the M1 Carbine is not a carbine version of the M1 Garand rifle. They are different firearms and use different ammunition.

The M1 carbine was also one of the most cost-effective weapons used by the United States military during World War II. At the beginning of World War II, the average production cost for an M1 carbine was approximately $45, about half the cost of an M1 rifle at approximately $85 and about a fifth of the cost of a Thompson submachine gun at approximately $225. The .30 Caliber carbine ammunition was also far cheaper to produce than the standard .30-06 ammunition; used fewer resources, was smaller, lighter, faster, and easier to make. These were major factors in the United States military decision to adopt the M1 carbine, especially when considering the large numbers of weapons and ammunition manufactured and transported by the United States during World War II.

The overall condition is very good. The action is strong. The bore is bright. The barrel band is marked “SI”. The left buttstock is stamped with a star symbol and “FAT/76”.  This example is Parkerized with an Inland receiver and barrel dated “1-45”. It also includes a canvas web sling, and oiler. Here is a fantastic piece to collect and display!