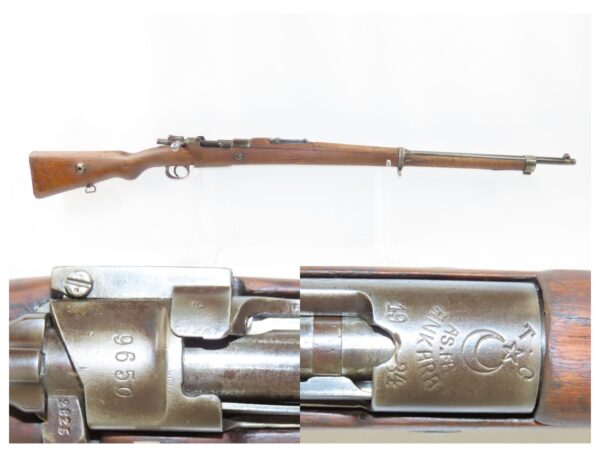 Here we present a C&R Turkish Ankara Model 1903/38 Military Rifle made in Ankara, Turkey circa 1934. Many of the Turkish rifles were lumped together into a group called the Model of 1938, which wasn’t a single model, but rather a common set of features. The designation isn’t even one that the Turks used, but rather is a designation that U.S. importers used to describe these rifles. It is assumed that the Turkish military took whatever rifles that they had and converted them to this design. The most common of these rifles are the K. Kale marked rifles. The markings on this rifle are T.C. for Turkive Cumhuriveti, for Republic of Turkey. A.S.F.A. for Askari Fabrika, or Military Factory. ANK ARA for the city of manufacture.

The overall condition is good+. Strong action. The bore is bright (metford style rifling). Excellent stock. “CAISIALB VI MADE IN TURKEY” marked on the left side of the barrel on the muzzle end. Numbers match except for the bolt.