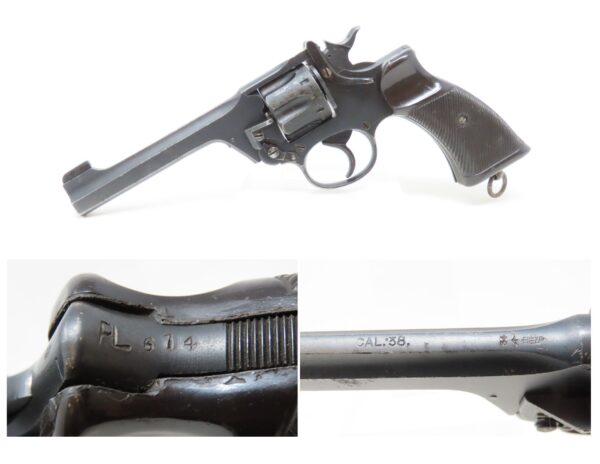 Made circa 1934 in Enfield, England

Here we present a C&R Enfield No. 2 Mark I Revolver made in 1934 in Enfield, England. The Enfield No. 2 is a British top-break revolver using the .38/200 round manufactured from 1930 to 1957. It was the standard British/Commonwealth sidearm in the Second World War, alongside the Webley Mk IV and Smith & Wesson Victory Model revolvers chambered in the same caliber. Originally adopted by the British Army in 1931 as the Enfield No.2 Mk.1, the design was first changed in 1938 to be double-action only with a spur-less hammer and was called the No.2 Mk.1*, then changed again in 1942 for the final time with some simplifications for faster production and called the No.2 Mk.1**. It was simplified in order to increase production during wartime. It was based on Webley & Scott’s Mark IV revolver in .38 S&W, which Enfield modified and produced as their No. 2 MK I.

The overall condition is very good. Original finish. The action is excellent. The bore is shiny bright with nice rifling. The numbers match on the frame and barrel but not the cylinder. The designation “PL614” is stamped into the backstrap. The grips are in good condition. A nice British sidearm from WWII!