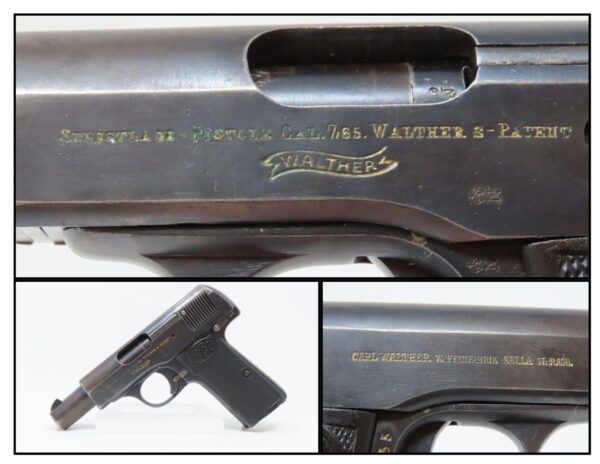 TRENCH WARFARE Pistol Made Circa 1915

Here we present a Walther Model 4 Pistol manufactured circa 1915 in Zella St. Blasii (later Zella-Mehlis), Thuringia. Carl Walther started his company in 1886 in Thuringia, a centuries-long an iron mining and metal-working center in the German states. Carl worked with his son Fritz to develop their early lines of semi-automatic pistols in both .25 and .32, which were on the cutting edge of their time. These would culminate in Models 1, 2, and 3 before they would receive a government contract during the Great War for 250,000 of their Model 4.

The Walther Model 4, as compared to the Luger P.08 (the primary German semi-auto sidearm of the war), was less powerful but was reliable and easy to maintain, due to its simplicity, fixed barrel and easy takedown. Once it was adopted, it rapidly gained the confidence of the soldiers who used it.  By the end of World War I, thanks to its government contract, Walther was the largest pistol manufacturer in Germany.

This example is a scarce first variant of the Model 4 which comprised of around 5,000 of the total 250,000 pistols produced. This early World War I semi-automatic is sometimes referred to as the “Transitional Model” or “Model 3/4”. The serial number range on this early variant ranged between 29,000 and 34,085. The left side of the slide is marked “SELBSTLADE-PISTOLE CAL. 7,65. WALTHER’S-PATENT” on one line above the Walther banner. The right side is marked “CARL WALTHER WAFFENFABRIK ZELLA ST.BLASII” on one line. “CW” monogram is for Carl Walther on the grips.

The overall condition is fine. Original blue finish. Both grips are in very good shape. All visible markings are sharp. The bore is in great shape with nice rifling. The action is strong. An early and rare Walther Model 4!