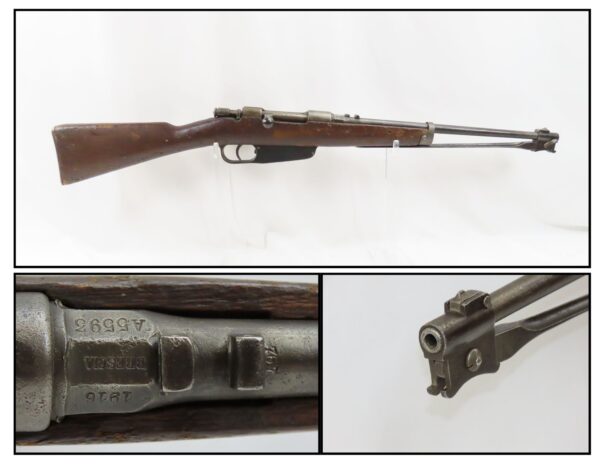 Here we present a C&R Brescia Arsenal Italian Carcano Model 1891 Moschetto per Cavalleria, or Cavalry Carbine, manufactured in 1916 during a production run between 1891 and 1919. This Carcano is a half-stocked cavalry carbine, with the unmistakable triangular folding bayonet which is fixed to a permanent muzzle mounting and hinges back under the stock, into a slot there. The Brescia Arsenal was a small arms factory located in Brescia, Italy, and active from the early 19th century to the end of World War II. Many kinds of small arms in use by the Regio Esercito were overhauled in the Brescia Arsenal, including the Vetterli rifle and the Carcano rifle in its many versions. Built-in assembly lines produced thousands of the latter, including the entire lot of the M91 TS (Special Troops) Carbine.

The overall condition is good. Good, functioning action. The bore has visible rifling and is in good shape. The stock is solid, though it cannot hide its age or experience. “1916” dated barrel.