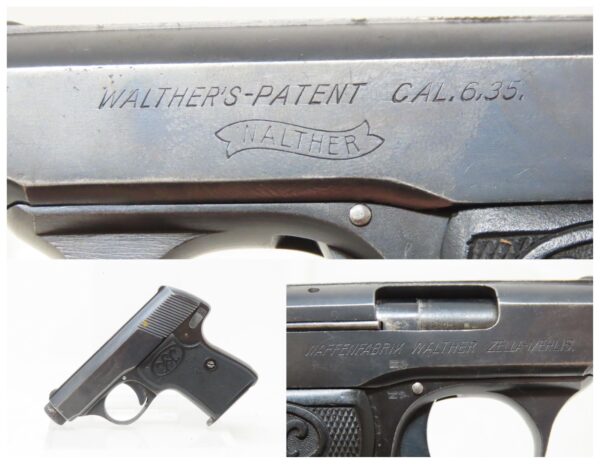 Here we present a C&R Walther Model 5 Pistol manufactured circa 1915-19 in Zella St. Blasii, Thuringia, a traditional metalworking and weapon-making area in Central Germany. World War I required a handgun more suitable for military use than the Walther Models 1, 2, and 3, and the Walther Company designed the Model 4 as quickly as possible by simply enlarging the Model 3, giving it better sights and a greater magazine capacity. They were rewarded with an order from the Prussian government in May of 1915 for 250,000 Model 4’s. The Walther, as compared to the Luger P.08, was less powerful but was reliable and easy to maintain.  Once it was adopted, it rapidly gained the confidence of the soldiers who used it.  By the end of World War I, thanks to its government contract, Walther was the largest pistol manufacturer in Germany.

Walther essentially took the Model 2 and moved the serial number to the other side and renamed it the Model 5.  Very soon thereafter they changed the slide serrations.  The earliest Model 5 pistols retain the broad slide serrations and the early Zella St. Blasii address, but these are quite scarce.  The vast majority of Model 5 pistols feature 16 fine triangular-cut serrations at the rear of the slide.  In early guns, the address on the right side of the slide is WAFFENFABRIK Zella St. Blasii, but on later guns this was changed to WAFFENFABRIK WALTHER ZELLA-MEHLIS in all-capital.  On early guns the left side slide inscription reads SELBSTLADE-PISTOLE CAL.6,35. WALTHER’S-PATENT with the Walther banner beneath it, just like the Model 2. Later guns simply say WALTHER’S PATENT CAL.6,35. with the Walther banner beneath. The Model 5’s are said to be better finished than the Model 2’s, but this can be difficult to distinguish on old pistols, depending on their state of preservation.

The overall condition is nearing fine. Strong action. The bore is in good shape and has slightly dimmed. Original finish. Both grips are in very good condition with average handling. Legible markings. Here is a nice German made pistol that will fit into any collection.