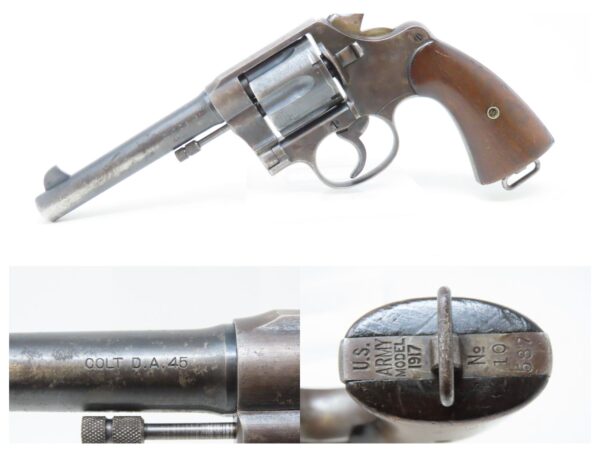 WWI-era Revolver to Supplement the M1911

Here we present a C&R United States Marked Colt Model 1917 double action revolver, made in 1917 in Hartford, Connecticut. The M1917 Revolvers were six-shot, .45 ACP, large frame revolvers adopted by the United States Military in 1917, to supplement the standard .45 ACP Model 1911 pistol during World War I. There were two variations of the M1917, one made by Colt and the other made by Smith & Wesson. Colt had until recently produced a revolver for the U.S. Army called the M1909, a version of their heavy-frame, .45-caliber, New Service model in .45 Long Colt to supplement and replace a range of 1890s-era .38 caliber Colt and Smith & Wesson revolvers that had demonstrated inadequate stopping power during the Philippine–American War. The Colt M1917 Revolver was essentially the same as the M1909 with a cylinder bored to take the .45 ACP cartridge and the half-moon clips to hold the rimless cartridges in position.

The overall condition is very good. Original finish/patina. Excellent action. Bright bore. Both grips are in good shape with an expected amount of handling. The bottom right grip is hand marked “J.K.”. Sharp markings throughout. “UNITED STATES PROPERY” marked on the underside of the barrel. Gilbert H. Stewart inspected, “GHS” marking on the left frame. “H” on the barrel and cylinder match.