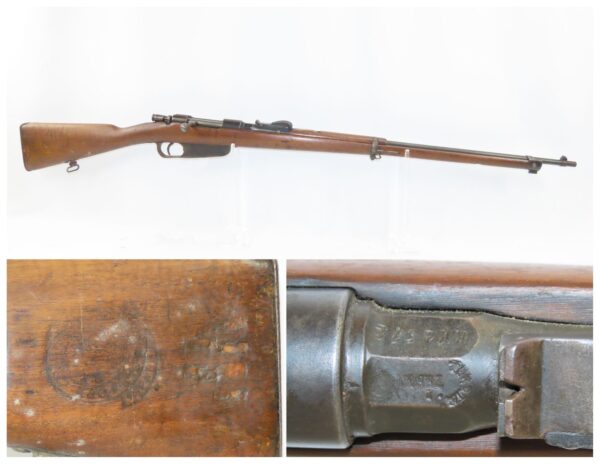 Here we present a C&R Terni Arsenal Italian Carcano Model 1891 Rifle, manufactured in 1915 during a production run between 1891 and 1919. The Terni Arsenal was a small arms factory located in Terni, Italy. The Terni complex was set up by a group consisting of the Italian steel and shipbuilders Odero and Orlandi, with technical and financial input from Vickers and Armstrongs of Britain to erect a Blast Furnace at Terni, and a connected “ordnance” works, for the manufacture of Guns (artillery) and small arms, in the late 1870s after the final unification of Italy with Rome as its capital in 1870. At the time, the centers of Small Arms and Artillery production were Turin (Torino), for the North, and Torre Annunciata (near Naples) for the South, both areas having been independent kingdoms prior to the re-unification struggles of the 1860s.

After reports of inadequate performance at both short and long ranges during the campaigns in Italian North Africa (1924-1934), and the Second Italo-Abyssinian War (1934), the Italian army introduced a new short rifle in 1938, the Model 1938, together with a new cartridge in 7.35×51mm caliber. However, the Italian government was unable to successfully mass-produce the new arms in adequate quantities before the onset of World War II, and in 1940, all rifle and ammunition production reverted to 6.5 mm, but no 7.35 mm Mod. 38 rifles nor carbines were ever re-barreled to the old 6.5×52mm caliber.

The overall condition is good. Strong action. The bore is in good shape and remains clear. The stock is solid with and expected amount of wear and cartouche remnants are visible on the left side. Cleaning rod is absent. Legible markings.