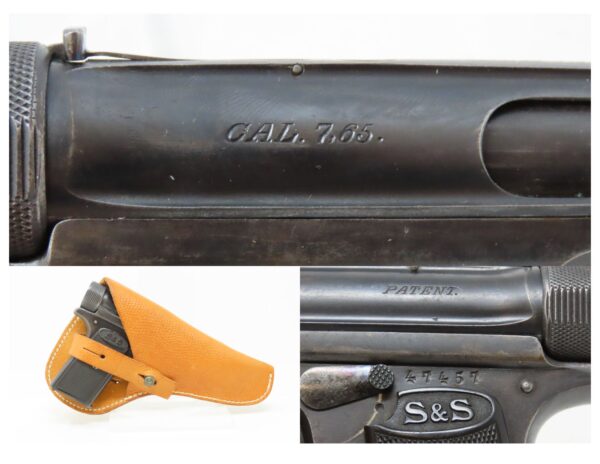 Chambered in 7.65mm Browning with HOLSTER

Here we present a J.P. Sauer & Sohn Model 1913 that is a self-loading pocket pistol of the blowback design. These pistols were chambered for either the 6.35mm (.25 ACP) or 7.65mm Browning (.32 ACP) cartridges. The pistol featured here is chambered for the 7.65mm Browning cartridge. The pistol features a front blade sight and a rear notch sight. This Model 1913 utilizes a 7 round removable box magazine, and the entire pistol weighs in at 21 ounces while unloaded.

The striker fired single action pocket pistol was the dominant form of self-loading pistols in the early 20th century. These small firearms were often pressed into service as substitute standard sidearms during WWI. The Model 1913 was being produced just prior to the start of WWI and as such it was a popular sidearm with both officers and NCO’s of the German Army. A number of the firearms were even purchased privately by the enlisted troops. After the end of WWI, production of the Model 1913 ceased but was resumed in 1922 where it continued until 1935. The Model 1913 served with the German military in both world wars and the police agencies of not only the Weimar Republic, but police agencies all around Europe following the end of the Second World War.

The overall condition is very good. Original finish. Excellent action. Bright bore. Both grips are in good shape with minimal handling wear. Sharp markings. “JHP” is hand inscribed on the left side of the magazine. The modern holster is in good shape.