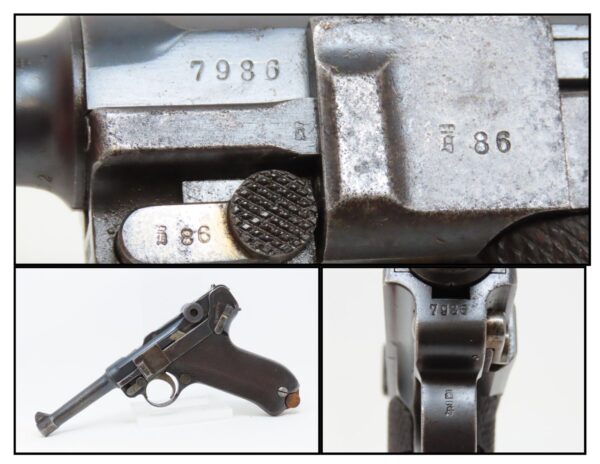 Here we present a World War I “1913” Dated Luger P08 Luger Pistol, made at the Royal Arsenal at Erfurt, Germany. These were made for the Imperial German Army and were used in the bitter fighting of trench warfare of the Great War. Basing his design off Hugo Borchardt’s seminal C93, Georg Luger successfully brought Borchardt’s work to practical fruition. While finding buyers for the C93 seemed an exercise in futility, the new Luger Pistol found many countries eager to test it and even adopt it. There are many variations in this field of collecting, but relatively few major changes in overall design from beginning to end. The Luger is certainly one of the most iconic firearms in history, made so by its association with Germany during both World Wars. His design would be especially successful throughout World War I & World War II. These pistols had and still have a reputation of being of utter quality and quite expensive to produce.

This specimen is dated “1913” on the top of the chamber. The toggle is marked with a “Crown/ERFURT”. This pistol is serial numbered in the German military style with numbers on nearly every part. German military proof and acceptance marks are located throughout.

The overall condition is very good. The action is robust. The bore is in nice shape, remaining bright and reflective! Both grips are solid and the checkering is very sharp. All markings are clear and legible. Here is a prime example to collect and display!