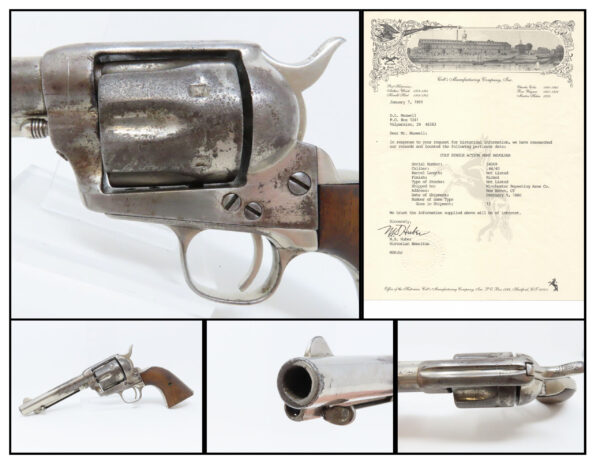 Here we present an antique Black Powder Frame Colt Single Action Army in .44-40 WCF, made in 1880 in Hartford, Connecticut. The Colt Single Action Army was introduced in 1873 and has become one of the most iconic firearms in all of history, thanks to its widespread use by the U.S. military, civilians and, more recently, in Western films. The included factory letter confirms this revolver, along with 12 others were shipment to Winchester Repeating Arms Co. in New Haven, Connecticut on February 9, 1880. It is known that in the late 1800s, Winchester served as a shipping agent for Colt. Though unknown if this was the circumstance here, it’s still a Colt SAA chambered in .44-40 Winchester Center Fire that was shipped from the Colt factory to Winchester factory in New Haven, Connecticut in 1880, making it a scarce item.

The Colt Single Action Army remained popular throughout the early-to-mid 20th Century, especially in the hands of old school law enforcement agencies such as the Texas Rangers. This one has some old graffiti inside the left grip panel that is interesting to say the least: “MACK 1937/NM STATE POLICE”. The date is significant because this around the time the New Mexico State Police was legitimized. When New Mexico was still a territory and had not yet become a state (statehood granted in 1912) there was established the New Mexico Mounted Patrol, which was established circa 1905. It is said that the organization was shuttered by the relatively new state government in 1921 due to corrupt government entanglements with organized crime. Something was needed, however, so the New Mexico Motor Patrol was established in 1933. This law enforcement organization became the New Mexico State Police in 1935.

The overall condition is good. The action functions, meaning that the hammer does indeed stay in the cocked position, revolve the cylinder, and drop when the trigger is pulled; however, the last “click is the only audible one. The cylinder stops are worn, therefore the cylinder can move when the hammer is fully cocked. The bore is semi-bright with nice rifling. The grip screw is a too short replacement. This example includes a factory letter that confirms the current configuration, although the barrel length and grips are not listed. The letter also informs of shipment information to Winchester in 1880. Here is a handsome Colt single action army for display with a letter!