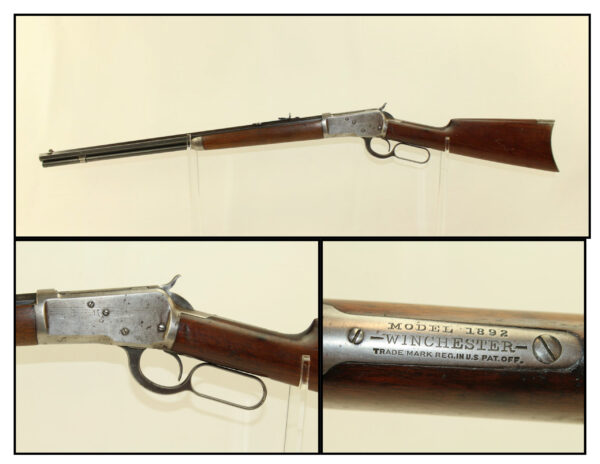 Classic Lever Action Rifle Made in 1905

Here we present a Winchester Model 1892 Lever Action Rifle chambered in .25-20 WCF, made in 1905 in New Haven, Connecticut. Another fantastic design from the mind of John Moses Browning, the 1892 was made to replace the venerable and iconic 1873 and featured its pistol caliber chamberings. The result was a trim and light rifle that was an immediate hit and stayed in production from1892 through 1938 and produced upwards to 1,000,000 rifles. Carbines such as this one continued production through 1941. The Model 1892 was first chambered in .44-40 cartridges, and in 1895 the 25-20 emerged. Many gun owners favored Winchester rifles for their ability to fire the same ammunition as their pistols, meaning that a cowboy, trapper or stagecoach defender could take along his trust rifle and pistol sidearm with only one supply of ammo!

The overall condition is very good. The blue finish has turned plum with age. The markings are clear. The walnut stock shows use yet remains smooth and solid. The bore is in good condition with serviceable rifling. The action is excellent, smooth and strong. The Model 1892 actions are always a cut above the rest with regards to smoothness.