‹ Back to the shop
View cart “WEST POINT Cadet SPRINGFIELD M1851 Rifle Antique RARE; 1 of 341 Known Rifled with Rifle Sight” has been added to your cart. 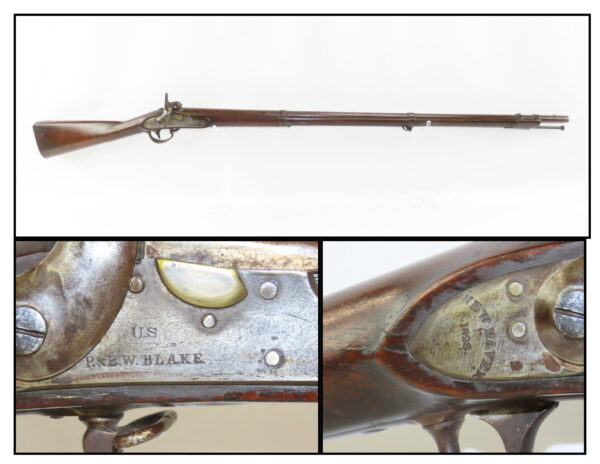 Converted Flintlock to Percussion Made in 1828

Here we present an antique first contract U.S. P. & E.W. Blake Model 1816 Percussion Conversion Musket, manufactured circa 1828 in New Haven, Connecticut. This musket was one of 15,000 muskets produced in this contract from the period between 1826 and 1830. Philos & Eli Whitney Blake were the nephews of Eli Whitney Sr. and were believed to be the trustees of the Whitney Armory from 1823 until Eli Whitney Jr. coming of age in 1842.

The War of 1812 revealed many weaknesses in American muskets. In an attempt to improve both the design and manufacture of the musket, the Model 1812 musket was created. The Model 1816 made further improvements and replaced the Model 1812. The M1816 was a smoothbore, muzzle loading weapon which used a .69 caliber musket ball. It was in production at Springfield (325,000) and Harpers Ferry (350,000) between 1816 to 1844 with around 675,000 muskets produced during this run. Additionally, more than a dozen contractors also made the Model 1816 Muskets, like this one, during its production years, adding more than 146,000 muskets for a grand total of 821,421 M1816 Muskets produced.

It saw service during the Mexican-American War and was even pressed into service during the Civil War in both the updated percussion and the original flintlock format, due to the shortage of guns. In the 1850’s, many 1816’s went through the conversion from flintlock to percussion. These were some of the most abundant weapons available to both sides, being in the hands of state militias, in the first days of the American Civil War. This musket is symbolic for the westward expansion of the country throughout the first half of the 19th century. The Model 1816 saw service in the Texan Revolution, including the Battle of the Alamo and the Battle of San Jacinto.  After the independence of Texas, the 1816 musket was chosen as the first standard musket of the Texan army in 1839

The overall condition is very good. The action is strong and the bore is smooth and gray. “JC”, for Sub-Ordnance Inspector James Carrington, is stamped on the barrel along with the cartouche on the left side of the stock reading “JC”. The number “34” is stamped atop the comb. “US” is marked on the buttplate tang. The lock reads “US/ P. & E.W. BLAKE” & “NEW HAVEN/1828”.  Here we have a nice Percussion Conversion musket that’s likely seen action in so many conflicts!