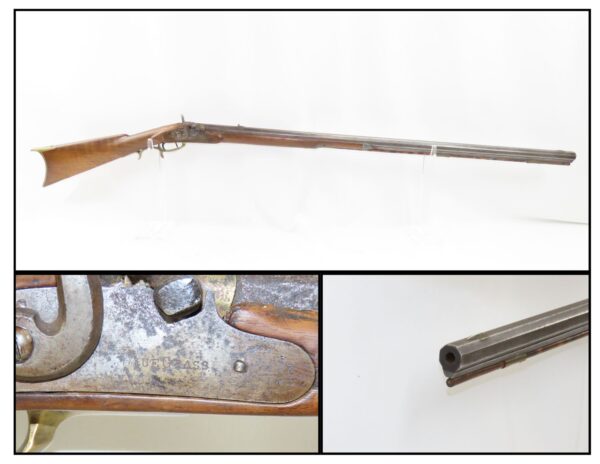 Here we present an antique Samuel Todd Sherwood Half Stock Percussion Long Rifle, made circa the mid-19th Century in Blandville, Doddridge County, West Virginia. Born in Pennsylvania, Sherwood moved to Doddridge County as a child, and according to information from the 1860 census, at the age of 32 he was already a gunsmith. His guns were widely known for their quality and accuracy. His own obituary in 1900 stated “He was one of the best, if not the best, gunsmith in the U.S.  His make of guns has been used all over the U.S.” When his wife Drusilla died in 1913, her obituary even focused on her husband as it stated “S.T. Sherwood was for more than a quarter of a century, one of the best pioneers in this section of West Virginia. Having established a reputation as a gunsmith second to none in the entire state, the marvelous skill and accuracy of his workmanship were known to our fathers over a wide are of the Western foothills”. Sherwood always signed his barrels, as is this one, with his initials “S.T.S”. He also put a brass plate against the barrel to be used as a buffer to prevent the corrosive effects of the primer compound. His rifles are highly prized by gun collectors to this day.

The overall condition is good. Strong action. Good bore. This example has a solid stock. The lock (probably a later replacement) is marked “BLUEGRASS”. Belknap Hardware Store in Louisville, KY are known to have sold under the trade name. “S.T.S.” is stamped atop the barrel.