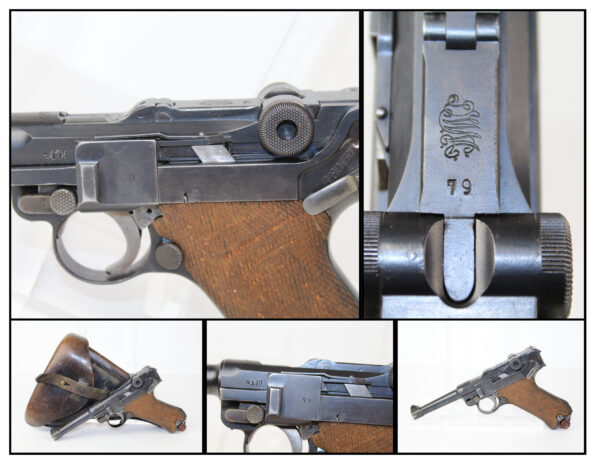 Here we present a Weimar Police Rework Luger Pistol by DWM, made in 1921 in Berlin, Germany. Basing his design off Hugo Borchardt’s seminal C93, Georg Luger successfully brought Borchardt’s work to practical fruition. While finding buyers for the C93 seemed an exercise in futility, the new Luger Pistol found many countries eager to test it and even adopt it. There are many variations in this field of collecting, but relatively few major changes in overall design from beginning to end. The Luger is certainly one of the most iconic firearms in history, made so by its association with Germany during both World Wars.

This Weimar Police Rework Luger Pistol is dated “1921”. This pistol would have been worn on by a policeman during the tumultuous years following the Great War and preceding the Second World War. It was “reworked” to install both a sear safety (top of the left side) as well as a magazine disconnect safety (left side just behind the trigger guard). Magazine disconnect safeties are frequently absent as they were easily lost. The “DWM” monogram features prominently on the top of the toggle. Weimar police proof and acceptance marks are found on the right side of the chamber. The front grip strap is unit marked “S.B.O.H.293”. Serial numbering is in the military/police style. This one comes in an original leather military/police style holster marked “A.FISCHER/BERLIN C.2/1939”.

The overall condition is fine. The original blue finish is 90%. Some of the straw colors are still present. The markings are clear. The serial numbers match. The magazine has an unnumbered wooden base. The bore is sharp and bright. The action is excellent. Holster is near fine. Here is a very nice example of a Luger Pistol that saw the rise of the Nazi Party in Germany leading up to the Second World War!