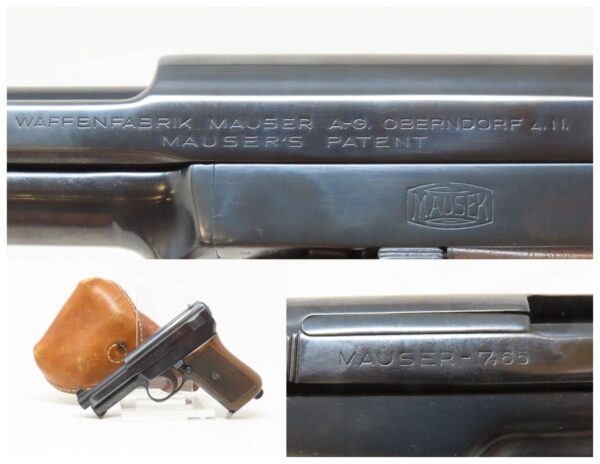 Here we present a C&R German Mauser Model 1914 Pistol, made circa the 1920s in Oberndorf, Germany. The Model 1914 was an early semi-automatic pistol for Mauser and one that was quite successful. They were made throughout the Great War and continued to be produced during the Weimar period. The development of Paul Mauser’s small pistols was well underway by around 1908, around this time he told the Deutsche Versuchs-Anstalt für Handfeuerwaffen (the German Experimental Laboratory for Handguns) that his company would be producing a small 7.65mm pistol “That would not be larger in weight and size than the well-known Browning 7.65 pistol”. The pistol we now refer to as the Mauser “Model 1914” was the 7.65mm (.32ACP) version and development work on it began after the “Model 1910” was in production. The design of the pistol was almost identical to that of the 6.35mm “Model 1910” but scaled for the larger and more powerful .32ACP cartridge.

The Model 1914 Mauser pistol was aimed at the police market, and the 7.65mm cartridge had already become the caliber of choice for many police departments in Europe. Changes were eventually made in this model that would become the Model 1934.

The overall condition is good. Strong action. Bright bore. The grip is in fine shape with sharp checkering. Visible numbers match. Legible markings. This example has been nicely refinished. The included period holster is in very good shape.