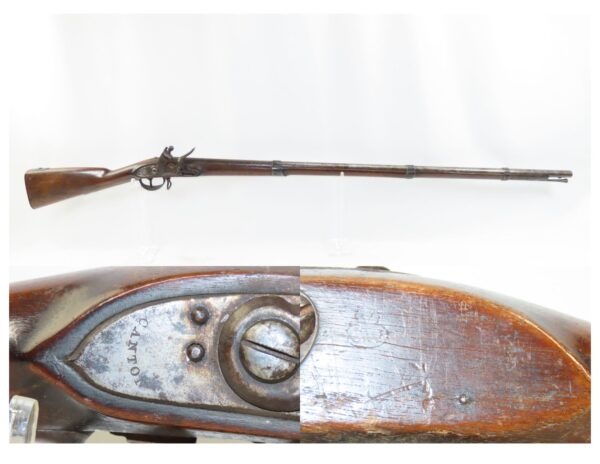 The lock is marked “T FRENCH” below the eagle and “CANTON/1810” located in front of the hammer. The lower sling swivel is mounted on a stud ahead of the trigger guard. The barrel bands are secured by springs behind the bands. Mounted with a full one-piece black walnut stock with the distinctive Harpers Ferry high comb and iron butt plate. This example features a clear cartouche on the left stock flat showing “CW”, for Ordnance Inspector Charles Williams, overseeing the inspection of flintlock muskets between the years of 1807 and 1814.

The overall condition is good. Strong action. The bore is in good shape for its age. This example sports a solid stock. The forestock is cracked just forward of the trigger guard up to the rear barrel band. Legible cartouche on the left stock flat. The front barrel bands are ad hoc replacements that show soldering—the front barrel band solder has cracked.