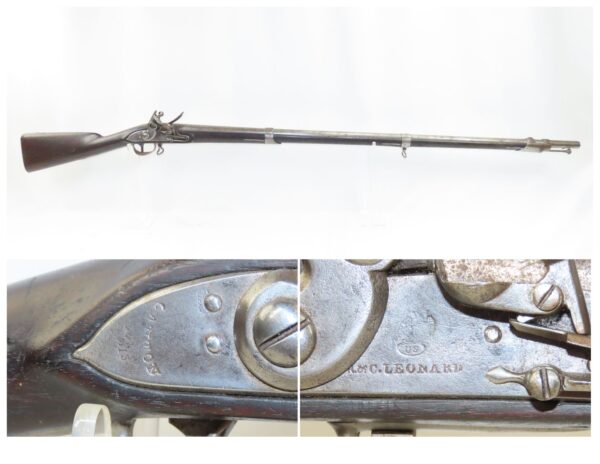 The War of 1812 was a conflict lasting about three years that was fought between the United States and the United Kingdom of Great Britain and Ireland. The conflict began when the United States declared war in June of 1812 and ended in a restoration of the pre-war status quo when a peace treaty agreed to earlier was ratified by the United States in February 1815. Its eventual consequences included the establishment of a separate Canadian state and an end of hopes for an independent American Indian confederation in the Northwest opening the way for the western expansion of the US.

The lock is marked “R&C LEONARD” below the eagle and “CANTON, MA/1813” located in front of the hammer. The lower sling swivel is mounted on a stud ahead of the trigger guard. Mounted with a full one-piece black walnut stock with the distinctive Harpers Ferry high comb and iron butt plate.

The overall condition is very good. Strong action in its original flintlock. The bore is good for its age—smooth and evident that it has not been fired since the period of use. The walnut stock is sturdy and contains an expected amount of handling wear. A cartouche remnant can be seen on the left stock flat. “US” marked barrel and lock. A rare opportunity to own a musket made during the War of 1812 and still in its original flintlock configuration!