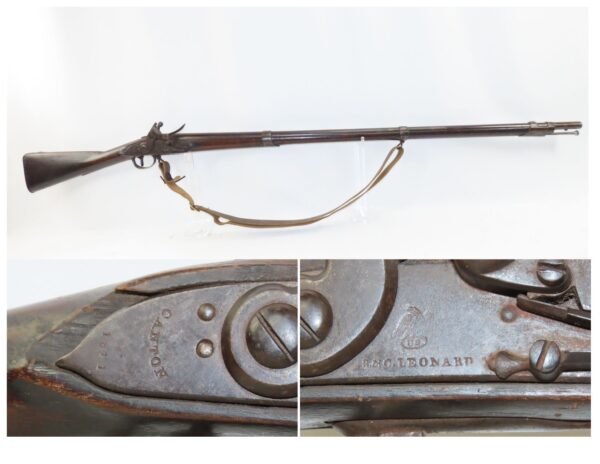 Here we present an antique R&C Leonard Contract Model 1808 Flintlock Musket, manufactured circa 1811 in Canton, Massachusetts. The firm of R&C (Rudolph & Charles) Leonard was one of 19 gunmakers contracted by the U.S. government to manufacture the Model 1808 Musket. Leonard manufactured approximately 5,000 Harpers Ferry Pattern Model 1808 Contract Muskets. Only 4,208 are estimated to have been delivered.

The lock is marked “R&C LEONARD” below the eagle and “1811” located in front of the hammer. The lower sling swivel is mounted on a stud ahead of the trigger guard with a sling included. The barrel bands are secured by springs behind the bands. Mounted with a full one-piece black walnut stock with the distinctive Harpers Ferry high comb and iron butt plate. Inspector’s markings remain visible throughout. The barrel markings are “US” and “V” along with “CT” within a recessed oval. The left stock flat is marked with what appears to be “V/KN”.

The overall condition is very good for age. The action is strong. Smooth bore with a patina. The stock is sturdy with an average amount of wear and a small chip behind the lock. Barrel tang screw is absent. The modern leather sling is in good shape. Here is a great example of an early American flintlock musket that was in service during the War of 1812!