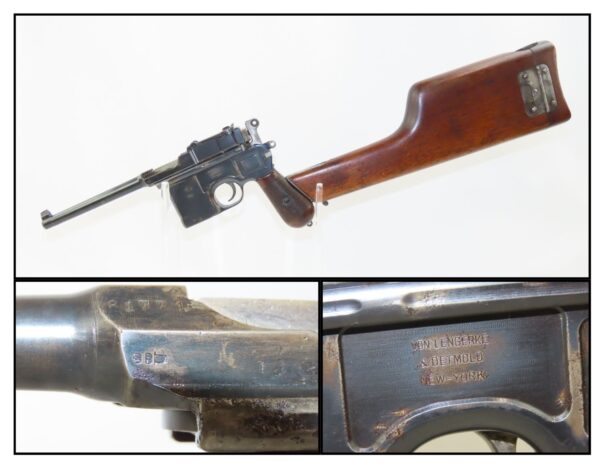 Here we present a Mauser C-96 Broomhandle Pistol, made circa 1925 with a production run between 1896 and 1937. Von Lengerke & Detmold was a well-respected New York dealer of fine European-made sporting guns and fishing tackle. They were founded in 1882 and was sold to Abercrombie & Fitch in 1928. The Mauser Construktion 96 was the Mauser Company’s most successful pistol and was even used by the likes of Winston Churchill during the Boer Wars. He is attributed as saying that it was “the best thing in the world”.

The distinctive characteristics of the C96 are the integral box magazine in front of the trigger, the long barrel, the wooden shoulder stock which gives it the stability of a short-barreled rifle and doubles as a holster or carrying case, and a grip shaped like the handle of a broom. The grip earned the gun the nickname “broomhandle” in the English-speaking world, because of its round wooden handle, and in China the C96 was nicknamed the “box cannon” because of its rectangular internal magazine and that it could be holstered in its wooden box-like detachable stock. With its long barrel and high-velocity cartridge, the Mauser C96 had superior range and better penetration than most other pistols of its era. The 7.63×25mm Mauser cartridge was the highest-velocity commercially manufactured pistol cartridge until the advent of the .357 Magnum cartridge in 1935.

This overall condition is near fine. Original blue finish with some mild spotting. The numbers match throughout. The action is excellent. The bore is bright and has good rifling. The stock/holster is in nice shape though there is a thin split near the bottom of the left side. This is a great pistol that could be carried in its own detachable shoulder stock, ready to become a handy little carbine at a moment’s notice.