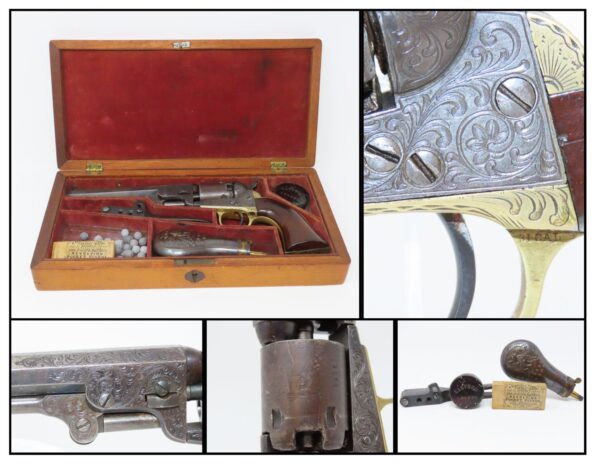 Here we present a Factory Engraved Antique Colt Model 1849 Pocket Revolver, made in 1868 in Hartford, Connecticut. The Model 1849 Pocket, the replacement for the Baby Dragoon, was the most widely produced of any Colt percussion pistol. Nearly 340,000 were manufactured during its 23-year production run that ended in 1873. Over 280,000 of these were produced by Colt’s factory at Hartford by the end of the American Civil War in 1865. These were very popular and saw a lot of use on the battlefield, on the home front and in the West. These were some of the smallest, handiest pocket revolvers of the time.

This one features what has been called the “late percussion vine” engraving that Colt’s engravers adopted from about 1861 through about 1870. This was a more highly refined version of the vining scroll that characterized Colt’s firearms when he first re-entered the gunmaking arena circa 1847. There are clear influences from Gustave Young—the Colonel’s trendsetting German prodigy who began his craft at age 8. In fact, Young was still working in-house for Colt at this time (c1852-1869) and had a team of engravers working under him in his particular style. You will observe the wolf’s head motif on each side of the hammer. The vining scrolls on each side of the frame and each side of the barrel reach their terminus in the interior of the largest one and there bear a flower blossom. The “E” suffix below each serial number was the Colt factory’s internal method of marking revolvers for special finish during this period (c1861-1870). The cylinder scene is the standard stagecoach holdup scene for the Model 1849.

A neat attribute of this highly refined revolver is that it was obviously carried and used—it is, after all, a tool. While there were some of these functional works of art that never saw the light of day after they were purchased or the presentation made, this one did. There is virtually no silver finish remaining on the brass grip frame, there is a small amount of “graffiti” on the bottom of the grip, and the bottom of the grip shows a series of dings on the right side, probably from repeatedly bumping something hard while riding a horse. The butt of the grip is marked “S.C.” in tiny punch-dots as well as a small “E”. The factory case is lined in burgundy velvet and in great shape. It contains a powder flask, .31 caliber double bullet mold marked “COLTS PATENT”, a percussion cap tin marked “ELEY BRO LONDON”, an assortment of lead projectiles, and a packet of “6 Combustible Envelope CARTRIDGES MADE OF HAZARDOUS POWDER~EXPRESSLY FOR~COL. COLT’S PATENT REVOLVING POCKET PISTOL”.

The overall condition is fine. Original blue finish. The action is strong. The bore is in good shape with strong rifling. Numbers match. The case is in fine condition with a small split on the front left corner of the lid. The velvet interior is well-preserved.