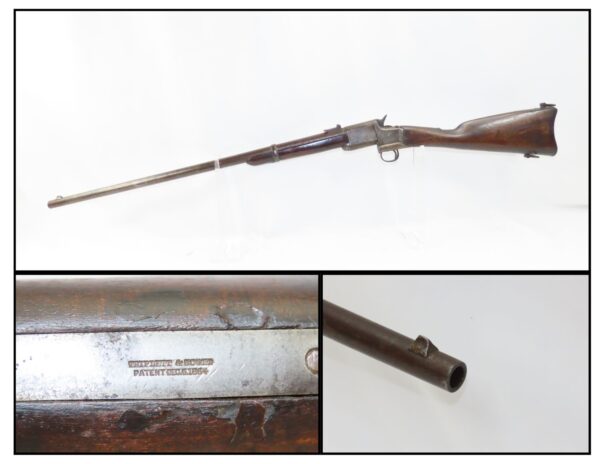 TRIPLETT & SCOTT Made for KY Home Guard Circa 1864

Here we present an antique “KENTUCKY” Marked Triplett & Scott Patent Rifle, made circa 1864-65 by the Meriden Manufacturing Company of Meriden, Connecticut. Meriden Manufacturing was founded by Charles Parker and his brother, who would later go on to become one of the most famous firearms manufacturers in the world with his beautiful shotguns. That firm would be called Parker Brothers. However, these brothers would first make themselves by contracting for the Union government during the American Civil War. They produced the Triplett & Scott Repeating Carbine on contract with the state of Kentucky for 5,000 pieces. These were to be issued to the Kentucky Home Guard for supply train defense for the Union Army as General Sherman marched on Atlanta.

The diversity of weapons, especially carbines, during the Civil War was incredible. All of them are different in their own way. The Triplett & Scott Rifle & Carbine differentiates itself by its operation. The 7-shot magazine tube is housed in the front of the wrist of the butt stock. By placing the hammer in half-cock and depressing a button with the right thumb, one would be able to twist the forward portion of the gun, which would activate the automatic ejector, pushing the empty case out, before the receiver pushed aside the loading gate on the magazine tube to pick up another cartridge. The design was quite ingenious and the precision with which it was executed is still evident.

The overall condition is good. Strong action. Bright bore, slightly dimming at the muzzle. The stock is solid but does contains cracks on the left side of the wrist where the magazine tube inserts, which is almost a universal issue with these guns due to the thinness of the stock here. A hand carved inscription can be seen on the left buttstock, possibly “JaS Jarvis” for James Jarvis. There was a James Jarvis in the 40th Kentucky Infantry.